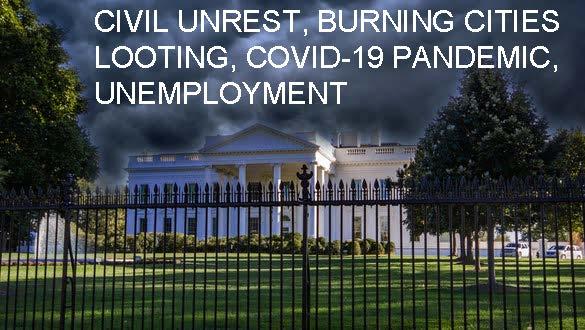 We the People of the United States, in Order to form a more perfect Union, establish Justice, insure domestic Tranquility, provide for the common defense, promote the general Welfare, and secure the Blessings of Liberty to ourselves and our Posterity, do ordain and establish this Constitution for the United States of America.

In what can seen as the ultimate symbolic move of perceived weakness to the Russians, Chinese, North Korea, etc. by the most powerful man in the world, The President of the United States hides in his bunker basement from his protesting public.

Keep in mind the White House is one of the most fortified buildings in the world and not since the insurgency on August 24, 1814, after defeating the Americans at the Battle of Bladensburg, a British force led by Major General Robert Ross set fire to multiple buildings, including the White House. The Burning of Washington marks the only time since the American Revolutionary War that a (foreign) power has captured and occupied the United States Capital.

Early Saturday morning, Donald Trump began the day tweeting about his fellow United States citizens (Not the Russian, Chinese, North Koreans, they are AMERICANS) surrounding the White House the night before.  Like two weeks back when truck drivers were blowing their horns in contempt, Trump perceived that they were showing their support to trucking policy.  Trump must have been feeling pride that the approaching crowds were cheering for his human rights accomplishments.  Apparently, with sweaty hands, President Trump praised the U.S. Secret Service, adding, “I was inside, watched every move, and couldn’t have felt more safe.” To feel safe from U.S. citizens demonstrating their First Amendment rights of self-expression is a wonderful and beautiful thing.

Trump wants everyone to know he’s not worried about himself, after all, he is a man of the people, and besides, he is a masculine self-reliant leader. (If overnight reporting is correct, and the president was brought to a bunker last night as a precautionary measure.) Trump kept going, claiming that “many” Secret Service agents were “just waiting for action.” Quoting an unnamed person, who may or may not exist, the president added, “We put the young ones on the front line, sir, they love it, and good practice.” In President Trump’s defense, he was probably envisioning a secret service were performing an exercise protecting him in the event hostile British forces again attacked us.

As for assertions that agents were eager for a violent confrontation with protestors, the Secret Service’s official statement seemed to dismiss this, too.

But based on statements from both the Secret Service and D.C. Mayor Muriel Bowser, it looks like Trump flatly lied. This was validated but the secret service themselves.

To be sure, the Secret Service tends to operate with great care when it comes to political disputes, and Saturday’s statement made no specific references to the president. But the context was striking: Trump claimed in the early morning that D.C. police were not permitted to address unrest around the White House, and the Secret Service made clear in the late morning that D.C. police “were on the scene.” 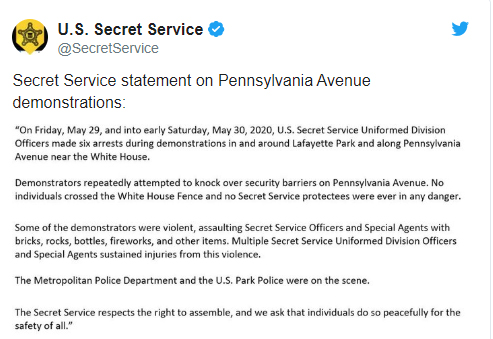 While the Secret Service regularly issues public statements, including through its Twitter account, it’s highly unusual for such statements to contradict the president directly.

“My police department in Washington, DC, will always protect D.C. and all who live and visit here. In fact, that’s exactly what we did yesterday and last night,” she said. “No one needed to ask the Metropolitan Police Department to get involved because we were already involved. Our police were doing their jobs from the start.”

So, Mr. President, it’s your word against that of both the Secret Service and the mayor of Washington, DC.  So Mr. President, who do we the people believe.

The United States currently faced with a pandemic insurgence of COVID-19 with over 103,000 Americans DEAD, over 43 million Americans out of work, major civil unrest crossing the country and American cities burning; and all you can come up with is another of your 18,000 plus lies when what the diverse peoples of the United States need is leadership.