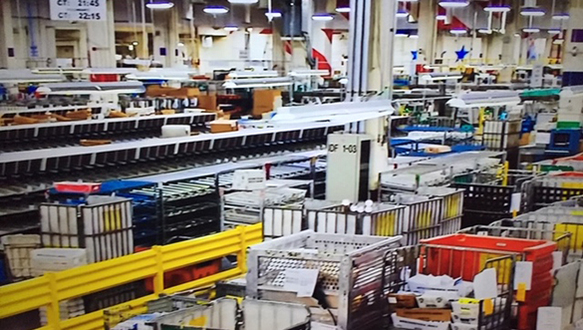 No word if the Postmaster-General will have the 700 mail sorting machines put back to work, or if he will return the thousands of mailboxes, he’s recently removed.

The Postmaster General faces at least one criminal referral by the New Jersey Attorney General and criminal indictment for slowing down and intentionally impeding mail delivery to prevent mail-in ballots from being processed. Trump’s newly appointed Postmaster General Louis DeJoy backed down today and agreed to eliminate any appearance of his criminal obstruction of mail delivery until after the upcoming election.

DeJoy has openly committed the crime of tampering with mail delivery after assuring Congress he isn’t.

DeJoy’s actions, according to many expert legal experts, amount to a criminal ‘conspiracy’ that’s so blatant that it's being documented in postal worker reports.  Workers have witnessed the removal of sorting machines, and intentionally engineered mail slowdowns across the country, even after an extra $10 billion was provided in the Cares Act, about three months ago.

Failure to return the mailboxes and the sorting machine could lead to his indictment and trial in New Jersey and several other states for criminal obstruction of the mail.

DeJoy would be challenged for a viable legal defense now that President Trump has clearly stated he intentionally slowed mail delivery to knee cap the election to help him win. Trump’s big mouth has dug an enormous hole for DeJoy and could put him in danger of a criminal indictment in more than one state. A federal pardon as Trump leaves office won’t be of any real help for DeJoy if he is indicted in New Jersey and many other states.

Asked by NPR‘s Noel King, the head of the Iowa Postal Workers Union Kimberly Karol, whether she has felt the impact of DeJoy’s changes, the 30-year Postal Service veteran answered in the affirmative, saying…

“Mail is beginning to pile up in our offices, and we’re seeing equipment being removed.”

“I don’t see this as cost-saving measures. I see this as a way to undermine public confidence in the mail service.”

Kimberly Karol went to point out “equipment that we use to process mail for delivery,” including sorting machines being removed from Postal Service facilities in Iowa.  DeJoy was rushing ahead with policies that, according to critics, were intended to sabotage Postal Service’s day-to-day operations less than 90 days before an election that could hinge on mail-in ballots. Karol said …

“In Iowa, we are losing machines. And they already in Waterloo were losing one of those machines. So that also hinders our ability to process mail in the way that we had in the past.”

“I grew up in a culture of service, where every piece was to be delivered every day. And his policies, although they’ve only been in place for a few weeks, are now affecting the way that we do business and not allowing us to deliver every piece every day, as we’ve done in the past.”

“I don’t see this as cost-saving measures. I see this as a way to undermine public confidence in the mail service. It’s not saving costs. We’re spending more time trying to implement these policy changes. And it’s, in our offices, costing more over time.”