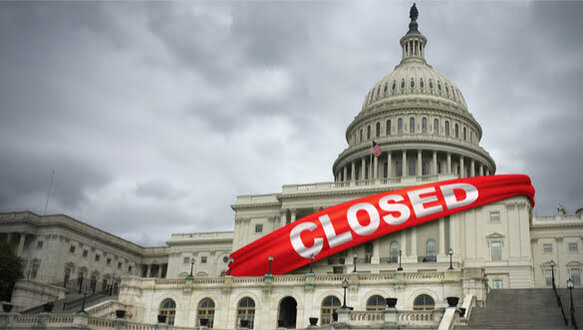 If Senate Republicans reject the House plan, the federal government faces a shutdown and perhaps a historic debt default, with global economic implications.

Republicans will prevent that measure from receiving the 10 votes needed to overcome a filibuster due to the debt ceiling hike, and GOP senators swear they are not joking.

So, what happens next? Legislators aren't quite sure.

"I'm not sure what the alternative approach is.... Plan B is for Republicans to step up and accept responsibility," said Democratic Party leadership member Sen. Debbie Stabenow (D-MI).

If the Senate's No. 2 Republican, Sen. John Thune (R-South Dakota), is asked about the next step, he told The Hill, "I believe Democrats will go back to the drawing board."

If Senate Republicans reject the House bill, the federal government would be days away from a shutdown and perhaps weeks away from a historic debt default, which would have far-reaching economic consequences for the whole global economy.

Congress has one week to act to avert a shutdown that would begin on October 1.

Treasury Secretary Janet Yellen has warned legislators that the debt ceiling must be raised as soon as possible, perhaps as soon as next month.

On Wednesday, press inquiries about potential escape routes from the encounter directed Democrats, leading some reporters to ask ridiculous questions.

Warren said, "I haven't been reading those children's books, so I'm not sure what you're talking about."

Republicans believe there is only one way out of the impasse: Democrats, who supported debt ceiling suspensions under former President Trump, will raise the debt ceiling on their own as part of the $3.5 trillion budget reconciliation package, which will not be filibustered and will pass without opposition.

McConnell predicted that the Democrats would ultimately surrender and raise the debt ceiling on their initiative.

"This is a fully democratic administration.

"They have a duty to raise the debt ceiling, and they will meet that commitment," McConnell says.

Democrats and Republicans may agree not to filibuster the House-passed continuing resolution debt package, enabling it to pass the Senate with a simple majority.

Democrats have 50 votes in the Senate and can pass the package on their own if the Republican Party does not vote against it.

Grassley (R-IA) said that Democrats could obtain authorization from the Senate to pass the House bill with a simple majority. The Democrats are pushing for a debt-ceiling hike. They do not want a government shutdown to occur. They take a seat on the floor.

Grassley said, "They were able to obtain the required 50 votes."

On the other hand, Thune has warned that Republicans would not enable Democrats to avoid the filibuster to raise the debt ceiling.

"I think a significant percentage of our members feel very uncomfortable doing anything that may make it easier for them," Thune says.

Republicans think that forcing Democrats to raise the debt ceiling as part of the $3.5 trillion spending plan would benefit them politically.

To do so, Democrats would have to provide a specific number in their statement that they are increasing the nation's borrowing limit. This figure would serve as the foundation for Republican campaign ads in 2022.

House Budget Committee Chairman John Yarmuth (D-KY) seemed to rule out any modifications to the bill in a statement released Wednesday, saying that "parliamentary obstacles prevent us from altering this reconciliation legislation or addressing the debt ceiling via reconciliation."

Sen. Tim Kaine (D-VA) indicated he was open to include a debt-ceiling hike in the Democratic-only proposal but that the time had passed for it to happen.

"It struck me that we should do it," Kaine said.

However, I do not think that changing that directive will be easy. Republicans think Democrats would ultimately cave due to their other political problems in enacting the $3.5 trillion plan, which has ignited a battle in Congress between centrists and leftists.

Roy Blunt (R-MO), the Senate Republican leader, referred to a continuing resolution as "a C.R."

"With all of the difficulties they are currently facing, I don't understand why they would want to add the government shutting down to that," he added.

Whatever the outcome, Republicans' rejection of the House-passed bill, which includes funds for natural disaster relief as well as Afghan refugee resettlement, raises the prospect of a protracted stalemate.

Republicans are not considering backing a short-term debt limit hike to buy more time for a bigger agreement to be achieved.

Janet Yellen, the Fed Chair, has indicated that the U.S. government would likely have more time before the deadline than she has announced publicly.

Blunt thinks that no matter what the government says, there is always more time.

Democrats may choose to remove the debt suspension and instead approve only the government spending portion of the bill to avoid a government shutdown. Doing so would imply surrendering to McConnell, which some Democrats are unwilling to do.

Sen. Jon Tester (D-MO) responded, "So, what's the plan?" when asked about the possibility of lifting the debt suspension and simply financing the government.

"We have to pay our bills," he stated unequivocally.

People must keep their minds apart from their lower extremities."

Suppose Democrats ignore the debt ceiling and continue to finance the government. In that case, it is unclear what they might tie a debt ceiling hike to before the U.S. government approaches the crucial date when it must either raise the nation's borrowing capacity or risk defaulting on its financial commitments.

Senate Democratic Leader Chris Murphy (D-Conn.) said he is "open to different approaches." Still, there is no question in my mind" that the debt ceiling would be increased only if Republicans vote to support the legislation.