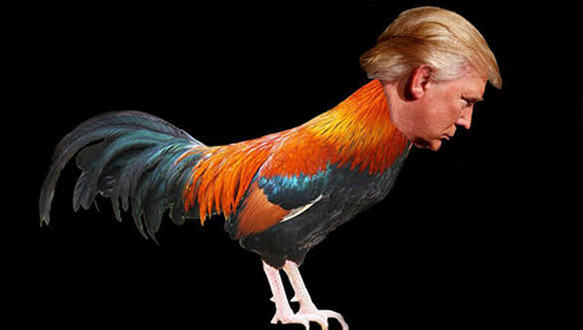 After ruining his reputation with most of the United States’ sane citizens and the world, a courageous ‘Chicken Trump’ should attempt to perform at least one honorable presidential deed.  He should leave the White House with dignity by recognizing President-Elect Joe Biden.  Unfortunately, he has decided to maintain the image of the ‘Chicken President.’

Please make no mistake about it; President Donald Trump is doing everything in his control to stay in power. He still supports most Republican political leaders who are bolstering his lies about widespread voter fraud.  They are oblivious to the damage this rogue president can inflict on the country if he could topple our government and impose an autocratic dictatorship.

Trump’s replacing of senior Pentagon officials with loyalists is a clear sign he’s considering a coup. So much for his claims of being a “law and order” president; a coup would affirm accusations that he’s just another want-to-be dictator.

At this point, most Americans refuse to believe Trump is capable of staging a coup and getting away with it. Most believe that Trump will be leaving the office on schedule, and what we are seeing his desperate, frantic clinging to the hope there’s a way to stay in power so he and his three oldest children won’t be forced to face prosecution and prison time.

Trump is the first to realize that when he leaves office on January 20, he becomes a mere mortal again and will be vulnerable to a dozen civil and criminal state and federal investigations. He also has to know that he will face dozens of civil suits involving his business practices, as well as his taxes. According to The New York Times, Trump, his three oldest and the Trump organization are already under investigation for insurance fraud, criminal tax evasion, grand larceny, and a scheme to defraud New York State.

According to The New Yorker magazine, the IRS could impose a $100 million judgment for past income taxes beyond what is believed to amount to $1 billion in real estate debts and other loans.

Timothy Snyder, a Yale history professor, pulled no punches when interviewed by Jane Mayer of The New Yorker …

“It’s the office of the Presidency that’s keeping him from prison and the poorhouse.”

This prompted Mayer to write in The New Yorker…

“If Trump does end up in prison as a result of his various civil and criminal legal transgressions, he will join the ranks of several of his former associates who have been charged or imprisoned under his administration.”

“Then, too, former Trump campaign managers Steve Bannon and Corey Lewandowski were, respectively, indicted with defrauding donors of a “We Build the Wall” fundraiser, and charged with misdemeanor battery.”

Wall Street and main street America ignore President Trump’s risk of actually having to face legal consequences for his crimes or the possibility of his or his three oldest children spending any time behind bars.

The fact is that no former U.S. president has ever spent time in prison or jail. Not even Richard Nixon, who received a pardon from President Gerald R. Ford in 1974.

Ford wrote of his pardon of Nixon that it restored “the tranquility” of the nation “that could be irreparably lost” if Nixon had been forced to face criminal charges.

While Bill Clinton was disbarred for lying under oath regarding both his Paula Jones and Monica Lewinski sex scandals and could have eventually faced criminal charges, he was never charged with criminal complaints after leaving office.

However, Trump and his three oldest face state crimes that will not disappear even if he pardons himself and children when he leaves office. New York Attorney General Leticia James and Manhattan DA are likely more emboldened by Trump’s long drawn out fight to stay in office by claiming voter fraud the past ten days.

Suppose Trump grants federal pardons to his three oldest children, his son-in-law Jared Kushner, himself, his sycophants Steve Bannon, Rudy Giuliani, Paul Manafort, Michael Flynn, and scores of other criminals that worked for him. In that case, he will find no mercy coming from either the New York State Attorney or Manhattan DA. They will be all over him the minute his presidency ends.

Trump, his crime family, and its participants cannot count on any help from President Biden. The new president will likely avoid even mentioning Trump during his first term. Biden will likely allow his attorney general, justice department, and law enforcement in states like New York a free hand and complete independence from influence from his White House.

The old saying “bad karma is a bitch” certainly applies to Donald J. Trump after spending the four years threatening his political opponents with jail time and encouraging his followers to chant “Lock Her Up” about Hillary Clinton.

Ironically even if Trump is convicted of serious crimes, he may never actually go to prison. I’ve long theorized that he would most likely find himself imprisoned in a specially designated stockade on a military base if he was convicted of federal or state crimes. It’s not likely that he would be sent to even a New York prison even if convicted, after being POTUS. He would likely receive special consideration instead of the secrets he may have garnished as president.

Still, Trump is panicked, and that’s why he has spent the last three years asking aides whether he could preemptively pardon himself and his family.

Trump may consider a pardon for himself