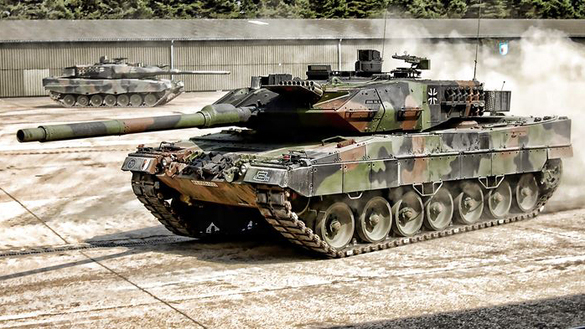 Germany has said it would not oppose Poland's attempt to send tanks built in Germany, which Ukraine has stated are necessary to ward off an incursion by Russia.

The foreign minister of Germany stated that Berlin would not prevent Poland from sending tanks manufactured in Germany to Ukraine. At the same time, the prime minister of Poland vowed to build a coalition of nations willing to donate some of Europe's most advanced weaponry, regardless of whether or not Germany participated in the coalition.

As the fighting is expected to pick up again this spring, there has been an increase in the amount of pressure being put on Germany to give authorization for the transfer of its Leopard 2 battle tanks to Ukraine. These tanks are stocked by a number of European countries and are regarded by Kyiv as being essential to its military effort. Polish government representatives have been among the most vocal in their calls for Germany to provide its approval, something Germany is legally obligated to do as the tank's creator.

On Friday, German defense authorities said they could not strike a deal with Berlin on the tanks. Berlin has so far resisted transferring its own Leopards to Ukraine or providing other countries with the required licenses to export them.

On Sunday, Annalena Baerbock, Germany's Minister of Foreign Affairs, gave the impression that Berlin was ready to enable allies at least to deploy tanks to Ukraine. She said that Germany "wouldn't stand in the way" if Poland wanted to deploy them, although she added that Warsaw had not yet sought such authority. This was something that she said to the French station LCI TV.

During the same conference, the President of France, Emmanuel Macron, said that he would consider supplying tanks produced in France under the Leclerc brand to Ukraine but would coordinate any decision with allies beforehand.

Michael McCaul, a Republican from Texas and the new chairman of the House Foreign Affairs Committee in the United States, suggested on ABC's "This Week" that the United States should send at least one M1 Abrams — its best tank — to Ukraine to convince Germany to give the Leopards the go-ahead. This argument was made on the same day. Berlin has requested that the United States deploy Abrams tanks to Kyiv, but the administration of President Joe Biden has shown little interest in complying with this demand.

According to authorities, the requests that Ukraine has made to the West for tanks and more weaponry at a time when both sides in the war are planning offensives have taken on a heightened sense of urgency as the spring season draws closer. And Russia's recent claims to have conquered the tiny eastern villages of Soledar and Klishchiivka — as part of a larger campaign to grab the metropolis of Bakhmut — have contributed to the mounting strain on Ukraine.

The President of Ukraine, Volodymyr Zelensky, said that even if a few dozen Western tanks were not crucial compared to Russia's fleet of hundreds of tanks, they would assist Ukrainian forces on the battlefield and improve the morale of soldiers.

In an interview with the German television station ARD that was aired on Sunday, Mr. Zelensky said, "They urge our troops to fight for their own beliefs." "Because they demonstrate that the whole world is on your side."

The strain Germany is under, according to the Kremlin's spokesperson Dmitri S. Peskov, indicates "nervousness" among Ukraine's friends, but he also cautioned that if the West deploys tanks, Ukraine will ultimately be responsible for the repercussions.

According to the official Tass news agency, he stated, "The essential thing is that the Ukrainian people will have to pay for all these acts, for all this pseudo-support."

In response to the recent firing of an official for embezzlement, Ukraine President Volodymyr Zelensky has committed to take action against corruption. He has also emphasized that the emphasis on the conflict would not divert from the effort to address a pervasive problem in his nation.

Before Russia began its all-out invasion of Ukraine in late February, corruption was a pervasive problem in that country. And even though repelling Russian aggression has been the primary focus of Mr. Zelensky's administration, fighting corruption has remained a priority. This is especially true as weapons and aid totaling hundreds of millions of dollars flood the country, and the cost of rebuilding efforts is estimated to be in the billions of dollars.

Mr. Zelensky, who came to office in 2019 on the promise of cleaning up corruption, admitted in his nighttime speech on Sunday that the "primary emphasis" of the administration is on defense, foreign policy, and war. He came to power on the premise that he would clean up corruption.

"But this does not imply that I do not see or hear what is being expressed in society at many levels," he continued, noting problems with electricity and the acquisition of military supplies and stating that his administration will "take the required forceful actions."

Mr. Zelensky expressed his hope that firing an assistant minister on Sunday would serve as a "signal to all whose conduct or behavior violates the norm of justice."

Mr. Zelensky said, "I want this to be clear: There will be no return to what used to be in the past."

According to the organization, the National Anti-Corruption Bureau of Ukraine, Mr. Lozynsky was a member of that gang and had been apprehended while attempting to receive a bribe in the amount of $400,000 in exchange for assisting with the procurement of machinery and equipment. According to a statement released by the NABU, detectives actively attempted to identify additional persons participating in the group.

The anti-corruption prosecutor's office stated in a statement that the contracts were tied to restoring essential infrastructure facilities and providing light, heat, and water during the winter months. Over the last several months, Russia has been bombarding Ukraine with attacks on infrastructure targets to make life more difficult for people.

Even while Russia's war against Ukraine drags on with no end, Ukraine's supporters have been dealing with complex problems regarding the nation's restoration. These questions include who will pay for what and who should supervise the process and the finances. What type of independent supervision from the outside should be necessary for the money? However, research published in September by the German Marshall Fund in Washington, DC, predicted that the price tag would be $100 billion, despite Kyiv's saying that it would require $750 billion to reconstruct its infrastructure.

Reforms to the rule of law, anti-corruption efforts, and judicial systems are all prerequisites for Ukraine to become a candidate for membership in the European Union. In addition to worries that post-war rehabilitation efforts may be tainted by corruption, certain officials in the United States have voiced their fears that American weaponry sent to Ukraine could be diverted or stolen to be resold.

On Sunday, the minister of infrastructure, Mr. Kubrakov, said that he would provide instructions to his office to assess "all ongoing projects," including the budget and any outside money.