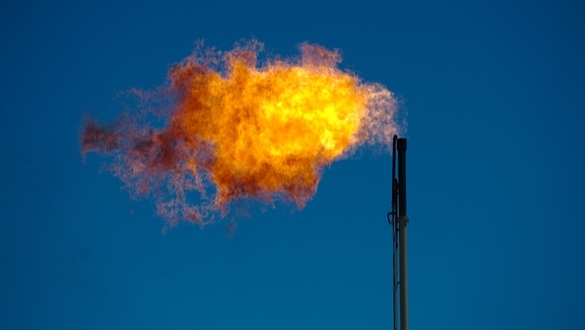 America’s biggest shale field is getting gassier forcing drilling efforts to slow down production. This is a bad time for explorers who are facing the prospect of reduced profits even as investors demand increased returns.

For a long time, the Permian Basin, The United States' largest shale field has faced major issues with natural gas.  The gassy problem has added to the woes of the producers who are facing a drastic fall in prices due to drilling slowdowns. Crude producers are forced to shell out money to get natural gas hauled away. Sometimes, they burn the gas outright, which is a controversy-ridden practice called flaring.

Flaring is the burning of natural gas that cannot be processed or sold. Flaring disposes of the gas while releasing emissions into the atmosphere. With a fall in output from aging wells and a reduction in the number of wells being drilled, problems are only getting worse.

When shale wells get first fracked, they produce a ton of oil. However, production levels fall over time – sometimes by over 70% during the first year alone – with natural gas forming a major component of the output mix.

Artem Abramov of Rystad Energy stated that activity levels weren’t like they used to be in the past. With oil ratios no longer enough for offsetting gas output in the older wells, gas-to-oil ratios in the basin saw a significant increase. 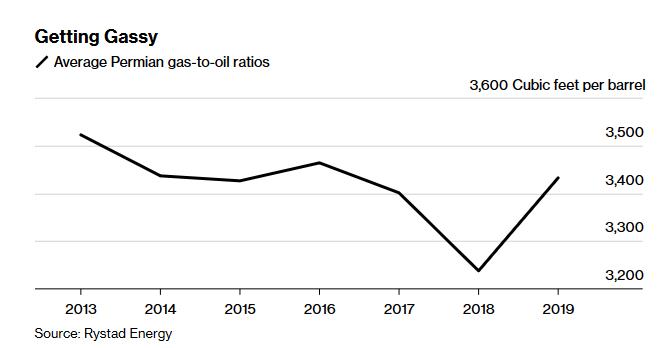 In the Permian’s Midland portion, an average well can produce over 2000 cubic feet of gas per oil barrel during its first year, stated Tom Loughrey, the founder of FLOW LLC. As time goes by, the output rises to around 5000 on average and can even breach 7000 in the Delaware field. These wells have an average lifetime of around 30 years.

What The Experts Are Saying:

Analysts Tai Liu, Juan Bautista, and Anastacia Dialynas noted that shale wells were notorious for drastic declines in output levels. Compared to NGLs [natural gas liquids] and gas, oil usually runs out faster. NGL and gas production goes on for a longer period, which increases the GOR or gas-to-oil ratios of US shale fields.

This issue only gets worse when additional wells get drilled closer to pre-existing ones, or when interferences are coming in from the neighboring wells owned by other producers.

Diamondback Energy (FANG) fell victim to this phenomenon in November when it issued a report that its Q3 well output contained a huge amount of natural gas. Oil output was only 65%, which is the lowest it has been since 2011. The fall was blamed on nearby producers who took way too long for fracking their wells. Diamondback has to revise its crude oil ratio estimations to 66% - 67% for 2019 compared to 68% - 70% estimation made previously.

Additionally, investments are increasingly being made in Delaware, which has a much gassier output compared to the Permian’s Midland portion.

Ryan Luther of RS Energy Group Inc. stated that most of the new gas supply would be from Delaware Basin, while other basins were expected to remain flat or see a decline in output. This can be quite challenging for operators in the Permian due to pipeline constraints. 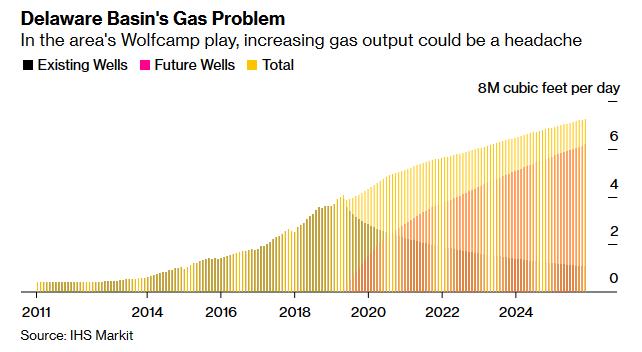 This Natural Gas Problem Exists In The Delaware Basin

In this basin’s Wolfcamp play, increased gas output levels could cause a major headache.

Back in April, the gas that was being traded at West Texas’ Waha hub dropped to negative $4.63 per million British Thermal Units. To put it simply, producers were being forced to shell out money for getting their natural gas output ferried away.

Small producers with increasing natural gas ratios took the hardest hits due to tanking prices. 2019 saw Approach Resources report that its oil production now accounted for less than 25% of the firm’s total output. It had to file for bankruptcy protection back in November 2019.

Permian field producers see record-high natural gas levels. The TRC, which is responsible for overseeing the gas and oil industry in Texas, issued over 6000 permits in 2019 that allowed explorers to vent or flare their natural gas output. This is more than forty times the number of permits that were granted ten years ago when the oil supply boom was taking off.

While flaring disposes of methane, it releases CO2 and other pollutants. William Cos (WMB), a pipeline operator, is now moving to file charges, decrying the agency’s behavior of approving all permits seeking flaring. It previously lost a complaint it had filed with the commission, where it argued that Exco Resources, a producer, should be using the pipeline system owned by Williams instead of resorting to flaring measures.

Dan Brouillette, the US Energy Secretary, stated that infrastructure issues were the reason behind the Permian field’s gas woes.

He stated that even if they were able to capture natural gas successfully, the ability to get them to the market was still lacking. They needed additional pipeline capacity to deal with the problem.

No major pipelines have been approved for construction in 2020. Kinder Morgan postponed the Permian Highway pipeline to 2021, citing bureaucratic and clearance hurdles.

However, not everyone believes that the Permian field’s flaring problem is a result of the lack of proper pipeline infrastructure.

While increased pipeline capacity can help the cause, it won’t solve the entire issue, stated Colin Leyden, senior manager of regulatory and legislative affairs at the Environmental Defense Fund in Texas.  He added that people were frustrated at the level of pollution and waste being generated by the Permian oil field.