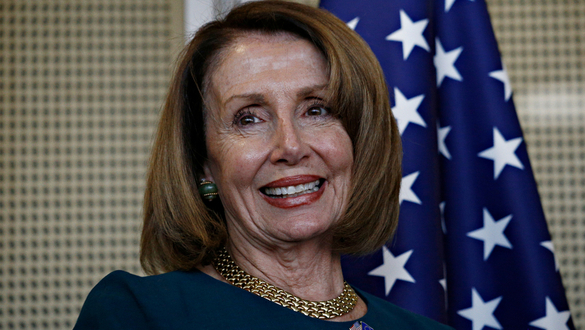 While fending off House Judiciary Chairman Jerry Nadler second request to launch impeachment proceedings according to Politico, Pelosi made it clear she wants President Donald Trump to go to jail. She may get her to wish; Trump is already an unindicted co-conspirator for crimes his former lawyer Michael Cohen is already serving a 3-year prison sentence.

“…pressed Pelosi to allow his committee to launch an impeachment inquiry against Trump — the second such request he’s made in recent weeks only to be rebuffed by the California Democrat and other senior leaders. Pelosi stood firm, reiterating that she isn’t open to the idea of impeaching Trump at this time.”

“Pelosi according to Politico that cited multiple Democratic sources familiar with the meeting, instead of impeachment, Pelosi still prefers to see Trump defeated at the ballot box and then prosecuted for his alleged crimes, according to the sources.

When asked about this Politico report several members of the House in the last 24 hours have expressed no surprise given her previous criticisms of the president, including saying…

“ Trump “is engaged in a cover-up,” that his staff and family should stage an intervention and that the president’s actions “are villainous to the Constitution of the United States.”

In recent weeks as the President has failed to comply with subpoenas as well as condone current and former members of his Administration.  White House counselor Don Meghan has stonewalled every request for documents made by House Intelligence Chairman Adam Schiff (D-Calif.), Oversight Chairman Elijah Cummings (D-Md.), Ways and Means Chairman Richard Neal (D-Mass.) and Foreign Affairs Chairman Eliot Engel (D-N.Y.) who were present for the meeting between Representative Nadler and Speaker Pelosi.

“Seriously, these Democrats are acting irrational, they’re radical and they’re out of touch. They are more focused on attacking this president, undermining this president than they are on solving the major problems that we see in the United States.”

“Democrats are saying, ‘Hey, we can do two things at one time,'” “What does this comment do to moving forward with anything of consequence?”

“I think it clearly shows the true colors of Speaker Pelosi and the Democratic Party. They are focused and obsessed with investigation after investigation, despite the fact that the president and this administration has been transparent throughout this whole process.”

However, like most of those spokespersons speaking on behalf of the White House Mercedes Schlapp is lying. The truth is POTUS refused to testify for the special counsel’s Russia investigation and has stonewalled on turning over documents, prevented and encouraged witnesses legally subpoenaed to defy those Congressional subpoenas.

“If the Democrats continue down this road, there will be no time for them to focus on legislating.”

… which also ignores both all the bills passed by the house this year and the dead on arrival policy of GOP Senate Majority Leader for all bills passed by the House and President Trump’s unwillingness to consider any legislation while the House is investigating him, his businesses, his family or anyone in his administration for criminal activity.