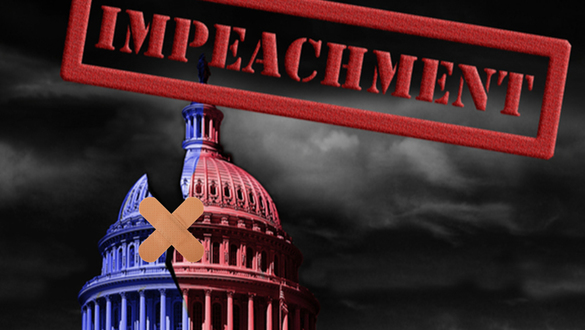 With as many as 6 Republican Senators now willing to listen to witnesses and consider reviewing hidden documents, Pelosi's strategy of holding back the articles of impeachment now looks like a brilliant move.

After weeks of delay and strategizing, the Speaker of the House Nancy Pelosi is planning to vote tomorrow to send the two articles of impeachment against President Donald Trump to the Senate to start the trial on removing him from office. At the same time, the House continues to investigate President Trump and his minions for more high crimes and misdemeanors.

Speaker Nancy Pelosi met Tuesday privately at the Capitol with House Democrats about next steps, ending her blockade a month after they voted to impeach Trump on charges of abuse of power and obstruction of Congress, and battle in the courts to get access to witnesses and documents.

Pelosi’s strategy of holding on to the articles appears to have removed the risk of the Senate Majority Leader Mitch McConnell’s ability to simply dismissing the case against Trump. Something the President pleaded for in Tweets over this past weekend…

“The President and the Senators will be held accountable…The American people deserve the truth, and the Constitution demands a trial.”

The delivery of the articles of impeachment will launch the third presidential impeachment trial in American history. A dramatic event that comes as the country is divided and only months away from a general election in which the President who has been impeached faces re-election.

Trump was impeached by the Democratic-led House last month on charges of abuse of power over pushing Ukraine to investigate Democratic rival Joe Biden and obstruction of Congress in the following probe. The Senate trial will likely begin in a matter of days.

Despite the defection of as many as six GOP senators who will likely vote for witnesses and agree to subpoena documents Senate Majority Leader, Mitch McConnell opened the Senate on today scoffing at what he called the “bizarro world” of Pelosi's impeachment strategy that has 66% of the American people insisting that John Bolton and others testify.

"It will fall to the Senate to end it with seriousness and sobriety,”

McConnell has been doing everything possible with Trump’s legal council to engineer a complete cover-up behind closed doors. However, enough GOP senators appear to be breaking the Trump loyalty test by resisting his goal of dismissal and witnesses being allowed to give testimony.

Senate Republicans are signaling they would allow a loyalty vote to consider a motion to dismiss and another if that fails to subpoena testimony from new witnesses and documentary evidence that has been held back by the Trump Administration.

A vote not to dismiss the case against Trump may be seen as a crushing loss despite his eagerness to have the Senate vote on it.

Trump seems desperate to see the charges dismissed, hoping to put his impeachment’s legitimacy into questions as he continually claims the House vote for impeachment to be a “hoax.”

According to some of the most credible reporters who cover the Senate for news services, McConnell does not have the votes needed from his GOP majority for a dismissal.

Sen. Susan Collins of Maine is leading an effort among some Republicans, including Mitt Romney of Utah, Lamar Alexander of Tennessee, Joni Ernst of Iowa, Cory Gardner of Colorado, Martha McSally of Arizona, Ron Paul of Kentucky and Lisa Murkowski of Alaska, to ensure the ground rules include calling several new witnesses. Senator Collins is in a fight for her political life and facing an election where she is handicapped by several of her votes in the Senate, including for the death of Obamacare. She was quoted yesterday as saying…

“My position is that there should be a vote on whether or not witnesses should be called.”

Senator Collins is pushing to have at least the promise of witness votes included in the organizing resolution being drawn up by Senate Majority Leader McConnell. She and the others appear to be gathering support.

"I've been working to make sure that we will have a process that we can take a vote on whether or not we need additional information, and yes, that would include witnesses,”

Meanwhile, Mitt Romney said he wants to hear from John Bolton, the former national security adviser, whom others who worked with him at the White House have testified that Bolton raised alarms about Ukraine arms blockade that was ordered by Trump as well as the backchannel diplomacy of Trump’s personal lawyer Rudy Giuliani. Monday Romney broke with the White House insisting…

“I expect that barring some kind of surprise; I'll be voting in favor of hearing from witnesses after those opening arguments,”

“We want the truth…Do Senate Republicans want to break the lengthy historical precedent?"

President Trump continues to want to turn his trial in the Senate into a circus by appointing his Personal Lawyer, now under investigation by the Southern District of New Your AG office, to his defense team. Trump also wants Republicans to subpoena former Vice President Biden and his son, Hunter Biden, who served on the board of a gas company in Ukraine while his father was vice president. McConnell is resisting these requests because he is worried that this strategy might blow up in the President and the Republican Senate's face.

It takes just 51 votes during the impeachment trial to approve rules, calls witnesses or subpoena documents. It will take just four GOP senators to form a majority with Democrats to insist on new testimony. It also would take only 51 senators to vote to dismiss the charges against Trump.

Vulnerable and institutionalist minded Republican Senators are now worried that despite President Trump’s ability to raise $1 billion to help him and them win re-election that several billionaires like Michael Bloomberg and Tom Steyer will invest $2 to $3 billion to defeat them and the President with a blitzkrieg of TV, Radio, and social media advertising.

The danger of witnesses testifying and the release of blockaded documents on live national television is not a trivial event. If Democratic accusations and suspicions are confirmed live on TV, Trump could face a backlash that destroys his re-election prospects or even his removal from office.  If that should happen, the  New York Attorney General is standing in the wing, ready to present his criminal case against Mr. Trump.