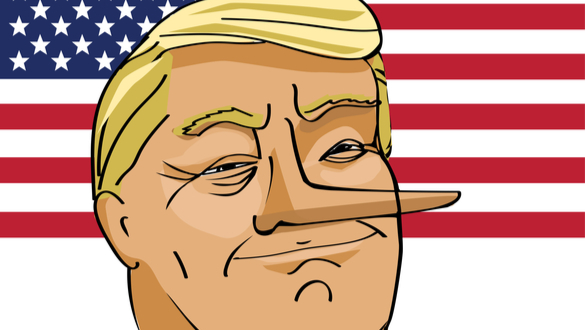 Facts don’t matter to President Trump. Moreover, since no one on the GOP side of the Congressional aisle has the integrity or morality to stand up to his 10,000+ lies and counting,  the illicit game called the United States Presidency continues.

Trump accused him of deleting text messages sent between two former FBI officials who had been critical of Trump during his 2016 campaign. Which, of course, was their legal right. Even FBI agents have the right to their own opinions.

Trump has no evidence to support his accusation.  Maria Bartiromo, the host of Fox Business Network’s “Mornings with Maria, said…

“[Mueller] terminated all the stuff between Strzok and Page,” Trump said,” in a wide-ranging phone interview. He terminated them. They’re gone. Moreover, that’s illegal. That’s a crime.”

Bartiromo a Trump sycophant and supporter of this lawless President didn’t challenge the President, proving she has no claim to being an independent journalist.

Peter Strzok, Lisa Page FBI agent and lawyer, were romantically involved and were removed from the team after their affair surfaced by Robert Mueller. The president bashed the pair in the interview Wednesday, calling them “stupid lovers.”

Trump and Bartiromo ignored an inspector general report noted that Strzok’s phone was reviewed before it was erased and that the move to wipe the data was standard practice.

Former Deputy Attorney General Rod Rosenstein told the inspector general that “the Department routinely resets mobile devices to factory settings when the device is returned from a user to enable that device to be issued to another user in the future.”

Nothing that comes out of Donald Trump’s mouth is true. Mueller had no access to either FBI member’s phones. So accusing him of deleting text messages if a figment of this sick child abusing narcissist paranoia.

Trump is in full panic mode because Robert Mueller has agreed to testify before Congress and his testimony is expected to shed light on Trump’s efforts to interfere with the Russia investigation and expose him to obstruction of justice charges immediately after he loses the 2020 election.

Trump’s tax and other business records will soon fall in the hands of Democrats in the House and Senate, and he is losing his grip on reality. We’re approaching a defining moment that will lead to deranged Trump being exposed for the conman, tax evader, money launder, and Russian collaborator as a growing number of Democratic calls for an impeachment inquiry gains steam.