Passengers Continue to be Stranded Across US Due to Canceled Flights 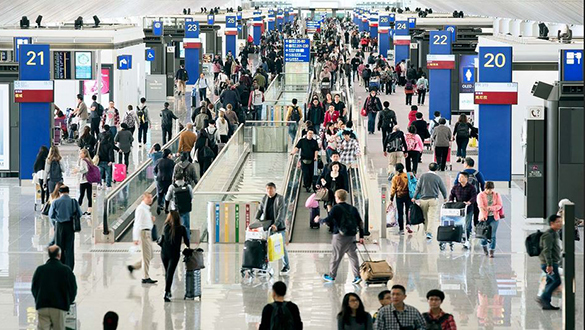 Since Christmas, thousands of flights have been delayed or canceled throughout the country, leaving nervous customers stuck as a growing number of airline employees are out of work due to COVID.

The airline industry has been preparing for the Christmas season for months, assessing plans, and putting together reserves of employees. However, it was insufficient to mitigate the impacts of the rapidly spreading Omicron coronavirus and the effects of heavy snow and strong winds in the western United States.

As the Omicron virus continues to spread, caseloads have continued to rise at a rapid pace; nevertheless, deaths and hospitalizations have remained relatively consistent. The ongoing interruption comes when the country is seeing an average of more than 260,000 new coronavirus infections per day. Northeastern and Midwestern states have some of the highest infection rates in the country.

The growth has had a significant impact on more than just air travel. The pace of life in New York City has slowed to a crawl as the disease has reduced the number of subway staff and emergency personnel on the streets. On Wednesday, it was announced that a state of emergency had been proclaimed in Cincinnati to aid with staffing issues within the city's Fire Department, which a spike had exacerbated in coronavirus cases that corresponded with expected holiday vacations. Many New Year's Eve celebrations have been canceled or scaled-down. More broadly, the virus has caused months of chaos in the food and beverage supply chains. JetBlue was one of the airlines that was particularly heavily affected on Thursday, with 17 percent of its total flights canceled. JetBlue said on Wednesday that it will shorten its flight schedule until January 13. AirTran Airways said in a statement that it has "had an increase" in sick calls due to the Omicron strain, making it difficult to adequately staff its flights even though it entered the Christmas season with more people than at any other time since the outbreak started.

According to the company, we expect the number of Covid cases in the Northeast, where the bulk of our crew members are stationed, to continue to grow over the coming week or two. According to the assessment, "there is a high likelihood of more cancellations until the caseload begins to fall."

Alaska Airlines canceled 14 percent of its scheduled flights this year. Because of the unrelenting snowfall and record-breaking low temperatures in the Pacific Northwest last week, flights were grounded, and it snowed again in Seattle on Thursday.

To help relieve its staffing shortage, the aviation sector has lobbied the Centers for Disease Control and Prevention to shorten the recommended isolation period for people infected with Covid-19 who live in the United States. The FDA has advised patients who have received a positive test result to isolate themselves for a period of 10 days after getting the results. Individuals who were not having any symptoms and those who were not suffering any fevers and whose other symptoms were lessening were given an extension of five days starting on Monday.

As one of the first firms to comply with the new standards, Delta Air Lines was one of the most successful. Following the implementation of a new policy on Tuesday, employees who test positive for the coronavirus to isolate after being vaccinated will be entitled to five days of paid vacation. The message was obtained by The New York Times from an internal message sent to business management at the company.