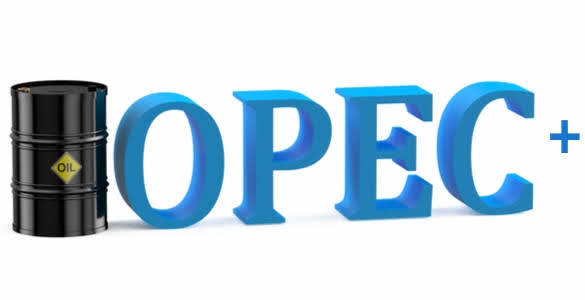 OPEC and a coalition of other global oil producers decided to raise their combined capacity by more than two million barrels a day during the next six months, banking on resurgent demand while they and the rest of the world determine the economic implications of the pandemic's course.

An extra 350,000 barrels a day will be introduced to production starting in May, with another 350,000 entering the market in June. The supply would be boosted by 450,000 barrels per day in July.

The OPEC+ alliance is currently reducing output by slightly more than 7 million barrels per day in an effort to support costs and minimize oversupply. Saudi Arabia, OPEC's de facto leader, has voluntarily contributed 1 million barrels a day to those cuts.

The deal reflects a consensus following earlier this week's intense differences among a community of producers who have operated in relative peace for months, resolving to significantly curb supply in order to balance oil markets. Early this year, the coronavirus pandemic sapped global appetite, causing stocks to plummet and straining the budgets of major producers such as Saudi Arabia and Russia.

The agreement reached Thursday by the two parties, known together as OPEC+, was a compromise between Saudi Arabia, OPEC's de facto chief, and Russia. Saudi Arabia had tried to retain cuts because it was wary of a fast recovery in oil demand after the pandemic. Meanwhile, Russia has claimed that the planet still requires more oil to fuel resurgent economies in several areas.

The decision is just another fast swerve in OPEC's zigzag oil policy over the last year, reflecting the difficulties of forecasters in the group—and elsewhere—in forecasting the beginning of a sustainable global rebound from the pandemic.

According to delegates, Saudi Arabia initially supported efforts to maintain current output levels prior to the meeting between the two parties. One of them described the decision to increase production as a "full U-turn." Throughout the pandemic, the party seems to have shifted dramatically from hope to pessimism about the outlook for post-pandemic economic recovery—and a strong turnaround in oil demand. Saudi Arabia has pushed for restraint.

In March, the group shocked oil markets by expanding much of the current cuts through April, including Saudi Arabia's earlier decision to slash its own production by 1 million barrels per day.

"The agreement is supportive of oil prices, yet should also help avoid a sharp spike upward as oil demand picks up," Wood Mackenzie analyst Ann-Louise Hittle wrote in a statement, adding that US oil demand could rebound strongly in Q3.

Despite the move to expand supply, oil prices were trading higher, indicating that traders believe there would be more than enough room for the additional oil. Crude oil traded 3.6 percent higher at $61.28 per barrel on the New York Mercantile Exchange, while Brent crude added 3.1 percent to $64.66 per barrel.

Saudi Arabia's Energy Minister Abdulaziz bin Salman, who has encouraged caution in the face of an unpredictable recovery, said that “the cautiousness is always there” in the group's response. He had cautioned ahead of the meeting that “until the proof of regeneration is undeniable, we should preserve this prudent approach... the waves are still tall and the seas remain rough.” One cause is a recent surge of diseases in Europe, which is weighing on the economy in the face of a sluggish vaccine implementation.

He found out that the cuts did not go into force until May, which implied that the Saudi voluntary reduction would still remain in effect for another month. He also stated that the arrangement allows the company to “tweak or adjust” output if required in the coming months.

Higher crude oil rates inevitably show in the price of fuel for US vehicles, since the expense of oil accounts for half of the price at the pump. Another aspect that might quickly force up costs is increasing fuel demand, which is nearing pre-pandemic peaks. The national average of $2.86 announced by motoring club federation AAA this week is 15 cents higher than a month ago and 84 cents higher year on year.

What is OPEC? | CNBC Explains