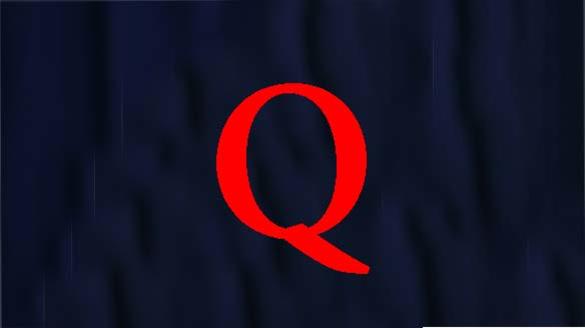 It turns out the Russian hacking and cyberwar is just one of the many online wars raging on the Internet right now.

A well-known hacking collective aptly named as “Anonymous” is now pledging to expose the people behind the "QAnon," a conspiracy right-wing theory group that has risen in prominence in recent weeks. Hundreds of its believers have begun showing up at President Trump’s recent campaign rallies.

“Anonymous,” an online anarchist hacking group is slamming QAnon calling the conspiracy group a potentially dangerous movement that is being driven by a "brainless political agenda" in a video posted by the group this past Sunday via what is widely considered the most reliable of Anonymous’ Twitter accounts…

"We will not sit idly by while you take advantage of the misinformed and poorly educated," the group said in the video, posted with the hashtags #OpQ and #OpQAnon.

The video depicts various figures with Anonymous masks acting out certain aspects of the QAnon conspiracy against a constant backdrop of the letter "Q."

The video claims that Anonymous "knew who was responsible for Q" and thought it was funny at first. However, the group now believes the conspiracy theory group has gone too far saying in its video.…

"Someone is going to get hurt, so we have to put our foot down and start some shit with you all."

QAnon gained attention as the result of numerous attendees at President Trump's rally in Florida last week holding up large Q-shaped cutouts and posters,  and Trump’s reference to his visiting Washington 17 times before becoming president – a tacit reference to the conspiracy theory. Q is the 17th letter of the alphabet.

"QAnon" conspiracy theories are in many ways best described as “way out there” and complete nonsense. Among the theories being put forward by this crazy group include …

This bizarre "QAnon" theory was apparently started last year by a person on the message board, 4chan, who claimed to be a high-ranking security official in the Trump administration. The individual or individuals have chosen the identity of "Q" and has continued to fan several absurd theories in recent weeks on several online social media and more than one dark web platforms.

While several conservative figures have pushed back against the conspiracy theory group on Twitter in recent days, including Michael Flynn Jr., the son of former national security adviser Michael Flynn, former White House press secretary Sean Spicer, and even by the White House following the Tampa campaign rally, Trump himself has flirted with the group during the rallies.

Trump may be playing with fire flirting with “QAnon” attendees at his campaign rallies as a result of knowing the group “Anonymous” – now targeting “QAnon” – has been adamantly opposed to Trump since he announced his candidacy for President since 2015.

The group “Anonymous” actually declared "cyber war" on Trump in March 2016, directing its followers to take down the then candidate's websites. Many of the “QAnon” believers insist that Donald Trump is in fact behind “this new movement” and insist he is fighting an evil liberal cabal.