Oil Tanker Sunk, another Damaged Drifting in the Strait of Oman 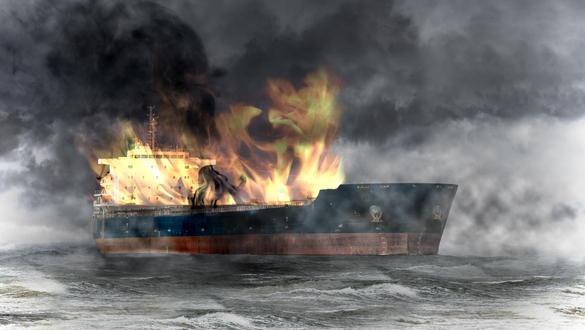 The U.S. economic war on Iran could be on the precipice of becoming a military war. Dozens of militias at war with Saudi Arabia and its Sunni Muslim allies in the Middle-East could send crude oil to over $80. Something Russia, Saudi Arabia, and oil producers around the world would cheer.

Two oil tankers were attacked in the Gulf of Oman, the same waterway where four other commercial ships were severely damaged last month after Iranian mines hit them according to the United States.

That attack last month the prompted the month prompted the United States deployed the aircraft carrier strike group led by the USS Abraham Lincoln, a bomber task force lead by B52’s and thousands of additional troops to the Middle-East citing "clear indications" Iran and Iranian proxies (militia’s) were planning an attack on U.S. forces in the region.

One of the oil tankers attacked today has been sunk by the attacks after it experienced an explosion. Frontline, which owns Front Altair which owns one of the vessels, said all of its 23 crew members were brought to safety by a nearby vessel, the Hyundai Dubai, according to Norway's VG newspaper.

The second vessel’s crew was also evacuated, but that tanker at last report was on fire and adrift. The U.S. Navy's Fifth Fleet responded to distress calls from both tankers near the strategic Strait of Hormuz.

These attacks occurred along one of the world’s busiest oil routes in the world where more than one-third of the world’s oil flows. The attacks caused the price of oil surged as the initial reports emerged this morning. The price rise in crude oil is exactly what Saudi Arabia and its allies, including Russia, want. They need the price of oil well over $80 a barrel to cover their social and military budgets.

The danger of a U.S. military counter-attack taking place is growing against Iran and its perceived proxies in the Middle-East, despite definitive proof of their involvement.