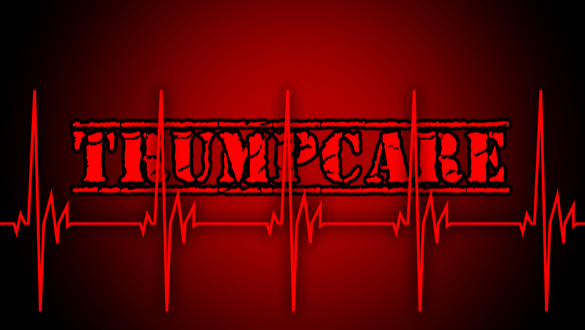 While President Trump keeps promising that he and the GOP will protect people with pre-existing conditions and provide better, cheaper insurance to Americans. The Trump Administration is about to do the exact opposite and will take away health insurance from 20 million more Americans, and dramatically weaken the health care of as many as another 130 million Americans.

Senate Majority leader and President Trump promised to rip the Affordable Care Act (ACA), commonly known as Obamacare, out by its roots and destroy it one way or another.

The GOP Congress, with the approval of President Trump, removed the mandatory tax for people that refused to buy healthcare policies. A tactic designed to undermine the Supreme Court decision led by Justice Roberts to side with the majority of the court that the ACA was constitutional because it was a tax.

On Tuesday a three-judge panel on the 5th Circuit Federal appeals court heard oral arguments that appeared to most observers present to have persuaded 2 of the 3 judges that without the mandate, the tax, they could literally make good on the Speaker McConnell and President Trump’s promise to finally kill the ACA by ruling its now unconstitutional.

If the 5th Circuit decides to rule the ACA unconstitutional, it will be the most profound disaster in the history of the U.S. health-care system and will instantly strip an estimated 20 million people of their health coverage.

In addition, it’s estimated this court ruling will also strip between 50 million and as many as 130 million additional Americans of their protections for preexisting conditions while also triggering mass closings of hospitals across the country that will be cut off from absolutely critical financial revenues.

The chaos will also extend to people who get their health insurance from their employers who will find many of the benefits they were entitled to vanish. Health care dollar limits of coverage will likely be re-imposed by insurance companies.

In truth, the 5th Circuit at the request of the Trump Justice Department is going to purge the entire regulatory structure of the current system in one single decision, and ironically it’s going to be an economic, social and political cataclysm that dooms the Republican Party to a landslide loss in 2020.

The doom ahead in this scenario will take place despite Senate Majority Leader Mitch McConnell (R-Ky.) assurances that if this decision takes place by the 5th Circuit, he and the GOP will protect Americans…

“I think the important thing for the public to know if there is nobody in the Senate not in favor of covering preexisting conditions,”

“And if it were, under any of these scenarios, to go away, we would act quickly on a bipartisan basis to restore it.”

“We will always protect patients with preexisting conditions.”

Neither President Trump nor Majority Leader McConnell has offered a replacement plan for the coming collapse that would be triggered by a decision by the 5th Circuit that the ACA unconstitutional.

A decision by the 5th Circuit to throw healthcare in America into complete chaos will make the 2020 election all about healthcare like it was in 2018 election.

Given President Trump’s inability to come up with a plan that ensures all Americans, rich, middle-class, poor, young and elderly he and the GOP will run in 2020 in much the same way Richard Nixon ran in 1968 on a “Secret Plan” to end the Vietnam War. In other words, they will lie their asses off.

Trump who has already lied or made misleading claims almost 11,000 times according to the Washington Post will promise more insurance, better insurance at a much lower price with no details -- while 130 million people are freaking out. He will, however, face the problem of his reputation for lying.

The entire 2020 Democratic primary will shift from their petty arguments on who did what in 1971, to who has the best health plan for the American people.

President Trump and the GOP will have no credibility without a well thought out plan that is capable of covering people with even more protections than they took away from the American people. Any effort to come up with a plan will be undermined by the chaos unleashed by the 5th Circuit Court’s decision.

The GOP and Trump will also have to deal with the wave of hospital closures in rural red and GOP controlled purple states. Already many of these states are in disaster mode with their hospitals.

In Kentucky alone, Senator McConnell’s home state, another 24 rural hospitals will close in the next 12-18 months, leaving many communities 45 minutes to 1 hour and 30 minutes away from life-saving emergency rooms. Heart attacks, strokes and emergency life and death care that far away will lead to thousands of needless deaths in Kentucky alone.

The closing of hospitals across red and GOP controlled purple states because of GOP budget cutting during the GOP control of Congress from 2017-2018 has created a healthcare hospital crisis in rural Georgia, Kansas, Pennsylvania, New Hampshire, Florida and even in Ohio.

Even if the 5th Circuit stays its decision for a Supreme court decision that disembowels Obamacare the threat of taking health care benefits from Americans and cutting Medicare, Medicaid, as proposed in President Trump’s 2020 budget, will be every bit the full 10 points political earthquake I am predicting.

Even enough non-college educated white men will understand what it means to have little or no insurance protection.

White women will bleed away from the GOP as they come to understand the danger.

The Trump Cult will be unable to work with Democrat Congressional leadership to save the day. The GOP, while refusing to compromise with the Democrats, will promise everything they reject, and lie their way through the 2020 election.

The imposed collapse of healthcare in the United States, the failure of President Trump to even cut prescription drug prices will make his and the GOP empty promises much harder to sell to those Obama voters, and suburban women he was able to rally in 2016 to vote for him.

The Democratic nominee will be forced to have a vetted plan, with a public option to ensure American citizen’s entire healthcare. The nominee will guarantee no Medicare or Medicaid cuts and provide a method for scientific research funding that will leverage accelerating technologies to cure all sorts of diseases.

Trump and the GOP will stammer and be confronted by one embarrassing scandal after another, including sickening revelations about corruption, conspiracies, and obstruction of justice.

The Democratic House will pass an emergency replacement for healthcare that Mitch McConnell will ignore. It will undermine their members up for re-election and Trump’s second term chances.

Republicans may have won the battle to destroy Obamacare, but it could lose control of the Senate with the loss of seats in Arizona, Texas, Kentucky, Kansas, Maine, Colorado, Georgia, North Carolina, and even Montana.

Losses like these would likely lead to a loss of the White House for the GOP as well, and handcuffs in the future for President Trump, members of his family and the more corrupt members of his administration.