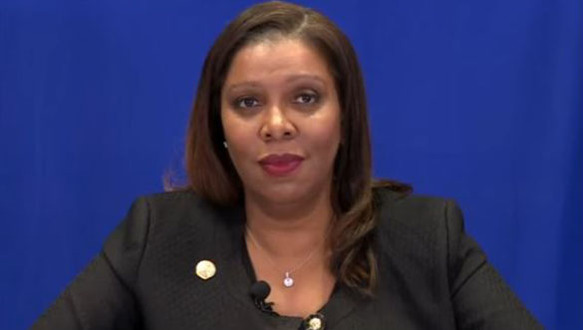 Letitia James, the Attorney General of New York State, made a stunning prediction on ABC’s The View Tuesday. She believes the commander in chief will take a surprising preemptive measure to try to cut future criminal charges off at the pass by resigning as POTUS, allowing Pence to be sworn in as President of the United States so he can grant Trump a pardon for all the Federal Crimes he has committed.

Many credible legal experts have voiced their opinion that no President of the United States can pardon themselves for federal crimes. It’s also no secret that some of the crimes that the president has potentially committed are state crimes that cannot be excused by any of his fixers.

New York AG Letitia James is currently pursuing a civil investigation against the president that could mature into a criminal prosecution. Simultaneously, Cyrus Vance Jr., the current while Manhattan district attorney, has a criminal investigation ongoing and has an ongoing grand jury looking into possible crimes committed by Donald Trump, his Trump Organization and his three oldest children.

“The vast majority of legal scholars have indicated that he cannot pardon himself.”

James pointed out that even if Trump takes that shocking step, and Pence goes on to pardon him, such an action cannot shield him from potential legal consequences in the Empire State…

“It’s important to understand he is pardoned from federal crimes. But he is not pardoned from state crimes. Last year, I introduced a bill in the state legislature that would close the pardon loophole so that individuals such as the United States president would not evade justice. We must have this check on presidential powers. I’m so happy The (NY) state legislature passed that bill and it is now the law in the state of New York. President Trump cannot avoid justice in the great state of New York.”