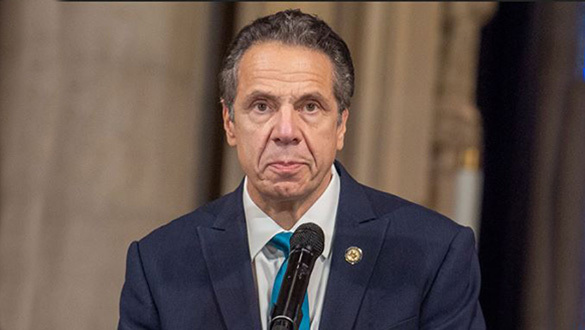 New York Governor Andrew Cuomo, blaming politics and changing perceptions of acceptable behavior, has announced he is resigning from his office after a state Attorney General investigation found he had sexually harassed 11 women.

Politicians throughout the United States should take a clear warning that hugging, kissing constituents and their staff either while campaigning or serving in office is now a thing of the past. They also have to recognize that it's not what they think when they share a hug or kiss with another; the only thing that matters is how that person perceives the public display of affection.

It took months for now-former three times elected Governor of New York to understand just how much society has changed. Having come from an Italian Jewish family that hugged and kissed one another, friends, and even new acquaintances, I understand the culture shock this represents. 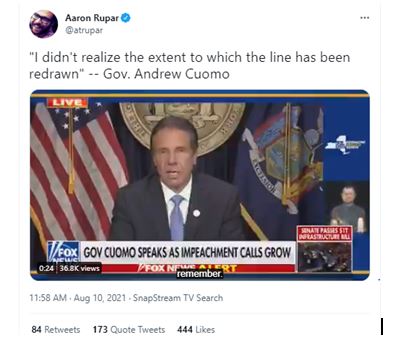 After a save face statement that included praising himself for having a diverse team, Governor Cuomo does not want to distract. He cannot be the cause of wasted time and money on litigation announced his resignation would be effective in 14 days.

We at Wall Street Rebel called for his resignation a few days ago. After hearing and watching the CBS interview with Brittany Commisso began working as an executive assistant in the governor's office in 2017.

Commisso, now 32, alleges that the governor groped her for the first time on December 31, 2019. She said that she was at the governor's mansion that evening to help Cuomo with his upcoming State of the State address. According to Commisso, after finishing her speech draft, Cuomo suggested the two of them take a selfie together…

"He was to my left. I was on the right. With my right hand, I took the selfie. While taking the selfie, I felt his hand go down my back onto my butt, and he started rubbing it. Not sliding it. Not, you know, quickly brushing over it — rubbing my butt."

Commisso said this made her so nervous that her hands began to shake, making it difficult for her even to take the picture.

"I was embarrassed," she said. "Not only embarrassed for what was going on, but I was also embarrassed that a governor wanted a selfie-and I couldn't take it. I was so nervous. I remember looking at them, and when he said, 'can I see them?' I showed him them. And he said, 'Oh, those aren't – those aren't good.'"

Cuomo then, according to Commisso, suggested the two try again on the couch. She said she accepted a suggestion because she thought he would no longer be able to touch her rear end if she were sitting down.

"So we sat down on the couch, and in the photo, I have my arm wrapped around his shoulder, almost as if we were taking a picture with a buddy. And I got a clear photo sitting down, and that is the one that has been blurred out that has been now released to the public." 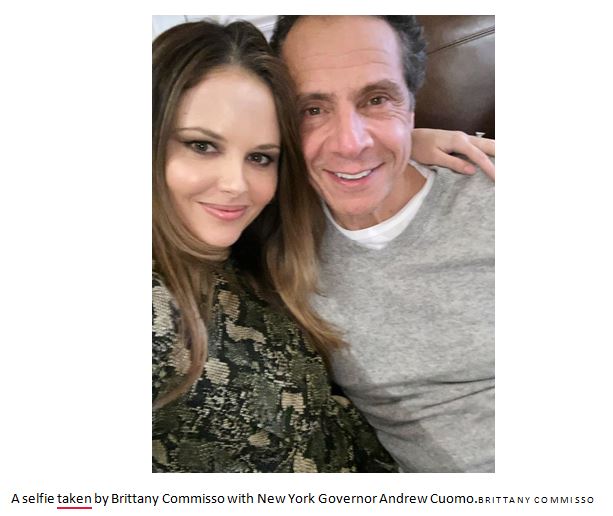 Cuomo had denied that he ever touched Commisso inappropriately, including when they took the selfie above.

Commisso alleges that Cuomo groped her a second time at the governor's mansion in November 2020. She claims that, during this encounter, Cuomo hugged her in a "sexually aggressive manner"…

"It was then that I said, you know, governor, you know, you're — my words were 'you're going to get us in trouble.' And I thought to myself, that probably wasn't the best thing to say."

Commisso claims she was afraid a staffer might walk in and get the wrong idea, but that after she said that, Cuomo "shut the door so hard to the point where I thought for sure, someone downstairs must think if they heard that, 'what is going on?'"

It was then that Commisso claims the governor groped her a second time.

"He came back to me, and that's when he put his hand up my blouse and cupped my breast over my bra. I exactly remember looking down, seeing his hand, which is a large hand, thinking to myself, 'Oh, my God. This is happening.'"

"It happened so quickly; he didn't say anything. When I stopped it, he just pulled away and walked away."

Commisso was not the first woman to come forward with allegations of sexual misconduct against Cuomo, but she is listed first in the attorney general's report. She believes this is because of the seriousness of her allegations.

Lt. Gov. Kathy Hochul will become New York's first female governor after Cuomo leaves office in 14 days. She has a solid political base throughout New York State and is considered the strongest possible candidate for the Democratic nomination for governor and election to that office in 2022.