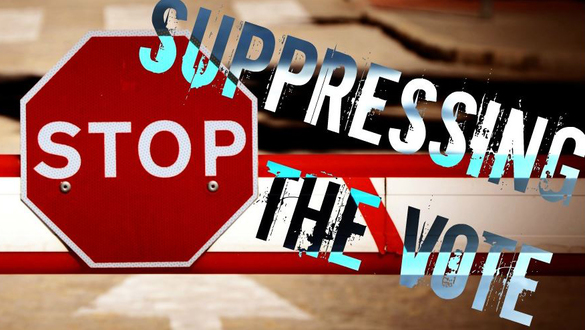 New York Attorney General Letitia James announced today her office has filed a federal lawsuit challenging changes to USPS operations ahead of the November election. She believes Louis DeJoy is using the post office to slow down the delivery of mail in order to suppress the vote count for Democrat candidates.

What is voter suppression?

Porter’s questions cut to bone proving DeJoy knows very little about postal operations. He knew a first-class postage stamp costs 55 cents, but had no idea on what the costs of other services were and claimed to have no idea who ordered the changes that have slowed down the mail.

“DeJoy claimed he was not responsible for decommissioning 671 massive mail-processing machines, which has slowed the delivery of mail and could potentially slow the delivery of ballots in states where they must be delivered to election officials by or on Election Day. DeJoy said those changes were in motion before he took his place atop the agency. Nor would he commit to recommissioning the machines, which were spread over 49 states and represented 10% of the total number of machines.”

The claim he had no knowledge of who ordered the changes made that have slowed mail across the nation, appears to be outright perjury after a memo to postal officials became public after his testimony written by him claims he made the decision to remove post boxes, and mail sorting machines and the slowdown in mail delivery was an unexpected consequence.

Rep. Porter proved by her questioning that DeJoy knew virtually nothing about the expected demand on the Post Office during the noting about the what he demand would be from upcoming election on the postal service when DeJoy admitted had no idea of how many people voted by mail in the last election.

Here’s the exchange between Porter and DeJoy:

Katie Porter: Mr. DeJoy, thank you for being with us today. What is the cost of a first class postage stamp?

Porter: Just wanted to check. What about to mail a postcard?

Porter: You don’t know the cost to mail a postcard?

Porter: You said fifty five cents for a first class stamp, but what if it’s like one of those greeting cards? If it’s a square envelope. Then what is the postage?

DeJoy: I’ll submit that I know very little about a postage stamp.

Porter: You are more in the shipping logistics business. What’s the weight limit for Priority Mail?

Porter: And what is the starting rate for USPS Priority Mail.

DeJoy: The starting rate for what?

Porter: No, the rate, the price.

Porter: Do you know about, within a million or so, can you tell me how many people voted by mail in the last presidential election?

DeJoy: No, I cannot.

Porter: To the nearest 10 million?

DeJoy: I would be guessing. And I don’t want to guess.

Porter: OK. So, Mr. DeJoy, I’m concerned. I’m glad you know the price of a stamp, but I’m concerned about your understanding of this agency. And I’m particularly concerned about it because you started taking very decisive action when you became postmaster general. You started directing the unplugging and destroying of machines, changing of employee procedures and locking of collection boxes. As a professor, I’ve always told my students that one of the most important rules in life is to read the instructions. Did you actually read and independently analyze the major overhaul plans before you ordered them to take effect?

DeJoy: Again, I will repeat that I did not order major overhaul plans. The items you identify were not directed by me. I did, and you don’t need much analysis, to get to run the trucks to a schedule.

Porter: Reclaiming my time, Mr. DeJoy. Could you please tell me who did order these changes? If the postmaster general did not cause these changes have resulted in, and you said yourself have said in this hearing–

DeJoy: The postal service has been around for 250 years. There are plans. There are many, many executives at almost the 30,000 executives within the organization–

Porter: Reclaiming my time. Mr. DeJoy, if you did not order these actions to be taken, please tell the committee the name of who did.

DeJoy: I do not know.

Porter: Mr. DeJoy, did you analyze these plans before they went into effect, you as postmaster general, supervise whomever did?

DeJoy: As I’ve stated numerous times. The plans were in effect and being implemented before I arrived.

Porter: Mr. DeJoy, do you take responsibility for these changes?

DeJoy: I take responsibility from the day I sat in this seat for any service deterioration that has has has occurred.

Porter: I’m reclaiming my time, sir. Mr. Dejoy, will you commit to reversing these changes.