No Trade Talks Underway Between Trump Administration and China 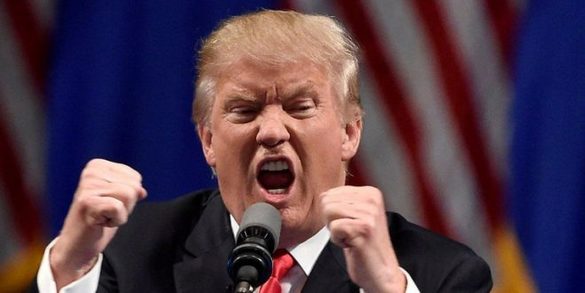 U.S. customs will begin imposing and collecting tariffs on Chinese imports in less than 11 days. President Trump claims these tariffs and others he’s threatening are needed to give him the leverage he claims he needs to secure a renewed trade deal with Beijing. Yet, there is absolutely no negotiations taking place. Further the Chinese seem to be digging like the Canadians, Mexicans, British and Europeans.

While Trump is willing to stage a summit with Russia, kiss North Korean leaders ass publicly he apparently see’s no upside in protecting the U.S. economy from a dangerous commercial conflict with the world’s 2nd largest economy.

Once these Trump ordered U.S. tariffs on the first $34 billion in Chinese goods take effect on July 6 — and trigger Chinese retaliation against American farmers and exporters — the political pain will mount for the president, according to several former U.S. negotiators and trade analysts.

Complaints from affected voters, farmers and manufactures are unlikely to sway Trump from compromising with China. Trump rarely if ever really back down because he loathes looking weak. Trump is employing an all or nothing approach to trade on the theory that our Chinese, NAFTA and European trade partners need us more than we need them. So what’s evolving despite the fact according to Derek Scissors of the American Enterprise Institute, who has advised U.S. officials on China policy in the past, is...

“There’s a group inside the administration that very, very much wants a deal. . . . But I’m talking about a Band-Aid.”

Trump’s base, which has cheered his attacks on Beijing, Canada, Mexico and the European Union as hostile powers guilty of “economic aggression,” expects him to fulfill his promise to shrink the trade gap, which he blames for the loss of millions of American manufacturing jobs. They’re not sophisticated enough to realize this hard line approach could blow up and undermine thousands of red state businesses.

Trump is instant that Chinese leaders reduce the estimated $375 billion U.S. trade deficit with China and scrap industrial policies that he says disadvantage American firms. Geoff Garbacz of Wall Street Rebel and Quantative Partners of Fitchburg, Wisconsin which is a institutional advisor firm serving some of the biggest brokerage firms, money managers and hedge funds thorough out the United States, including some of the largest on wall Street points out …

“This amounts to fake economics. The vast majority of economists around the world will tell you trade balances between two countries are determined more by national savings rates and broad economic forces than by trade barriers.”

In fact the trade gap between the United States and China continues to widened so far during his presidency and is on track to set a new record in 2018. So far through the four months of this year, the U.S. trade deficit with China was nearly 12 percent higher than during the same period last year, according to the U.S. Census Bureau.

The Chinese for their part have attempted to negotiate in good faith with Trump’s trade representatives offering to buy an additional $70 billion of American farm, energy and industrial goods in the first year of a trade deal, if the U.S. shelved its tariff plans.

That offer was far short of Trump’s demand for a $200 billion annual increase. Then Chinese officials withdrew the offer after the president’s latest tariff threat.

This is playing right in to Democrat hands …

“The Democrats are champing at the bit to win back what they see as their natural constituency: working-class voters,” said Ely Ratner, former deputy national security adviser to Vice President Joe Biden. “I would bet you many Democrats are going to move into that space immediately.”

This isn’t phasing Trump at all who reiterated contempt for China this past week at a campaign-style rally in Duluth, Minn., saying the country’s approach to trade “wasn’t fair.” Then on Friday, his administration announced new export controls and investment limits designed to curb China’s access to U.S. technology.

China in the meantime has targeted its reciprocal tariffs at twice as many jobs threatened by its tariffs at republican counties that voted for Trump in 2016 as in areas that backed Hillary Clinton, according to the Brookings Institution.

“They have mapped this out to a very fine level of detail, down to congressional districts,” said China expert Aaron Friedberg of Princeton University. “It is intended to inflict maximum pain on people they recognize as being Trump’s primary constituents in hopes that it will make him change course.”

Administration officials are echoing President Trump insistence that they can outlast China in a trade war because Chinese exporters sell almost four times as much to the United States as Americans sell to China. But that view overlooks the many ways that Chinese regulators can counter and harass U.S. companies operating in China.

Chinese officials when dealing with trade disputes in the past with the United States have discouraged their citizens from traveling to countries like South Korea or buying products made there. Companies like Apple or General Motors, which sells more cars in China than in the United States, could become collateral damage in a trade war.

Two of the most recent bargaining sessions, in Washington and Beijing, ended without agreement. The White House and Treasury Department have not respond to journalists questions about plans for additional negotiations.

There are widespread doubts, however, about whether tariff threats will be sufficient to compel Chinese concessions, especially when one considers the divisions in Trump’s negotiating team. At one point in Beijing, Treasury Secretary Steven Mnuchin and Navarro engaged in a profane shouting match while squabbling over the U.S. approach to the talks.

“They’re not going to just turn their system upside down for us,” said Friedberg, a former economic and trade advisor for vice president Richard B. Cheney on China. China has signaled it can be persuaded to modify its intellectual-property laws, liberalize services markets and buy additional American goods, if administration officials first reached agreement among themselves first, he said.

Meanwhile the Trump administration has severely undermined its leverage with China by at the same time alienating its NAFTA, European, British and Japanese allies by including them in tariffs on imported steel and aluminum introduced earlier this year and threatening even greater tariffs.

The president’s preferred tariff weapon also seems poorly onceived. The first round of tariffs on Chinese goods will hurt U.S. and foreign multinationals more than domestic Chinese companies, according to economist Mary Lovely of the Peterson Institute for International Economics.

Of the computer and electronics products affected by the July 6 tariffs, 87 percent are produced by multinational corporations’ Chinese affiliates rather than domestic Chinese companies, according to Lovely.

“I don’t see any negotiating process or strategy,” said Susan Shirk, chair of the 21st Century China Center at the University of California at San Diego. “I’m not confident that it will all work

We at Wall Street Rebel have issued a RED ALERT to stock and bond investors in the United States. This is shaping up to be a world-wide trade war. If it continues to escalate it may not drive the U.S. and world into a recession at first but it is capable of unnerving investors and causing a 10% to 15% correction in the stock market and serve to disrupt the farm and manufacturing business throughout Red State America. This is a potential black swan event in the making, investors should reduce their exposure to stocks until there’s a positive resolution which President Trump seems incapable of delivering.