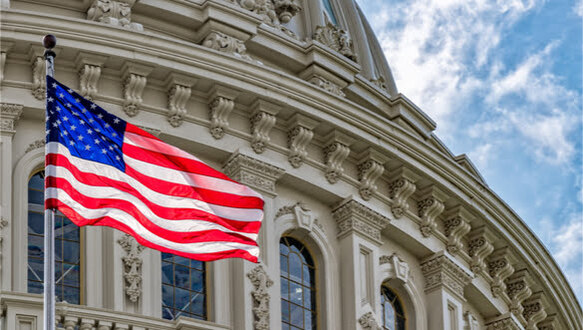 Washington and the rest of the nation felt instant relief regarding the temporary fix as Democrats voted 50-48 to raise the federal debt ceiling by almost half a trillion dollars.

By agreeing to extend the federal government's borrowing capacity until December and thus averting a historic federal default, the Senate has averted a financial crisis that experts said would destroy the economy and hurt millions of Americans.

After a 50-48 Democratic vote in favor of legislation to increase the federal government's debt limit by almost half a trillion dollars, there was immediate relief in Washington and across the country.

However, it only serves as a temporary respite.

Assuming that the House votes in accordance with the Senate's decision on Thursday night, which is expected to happen, Republican and Democratic legislators would still have to reconcile their profound disagreements on the subject before the end of the year.

As lawmakers work to fund the federal government for the upcoming fiscal year, they will also continue their bitter battle over President Joe Biden's top domestic priorities, which include a bipartisan infrastructure plan with nearly $550 billion in new spending as well as a much larger, $3.5 trillion effort focused on health, safety net programs, and the environment.

With a catastrophic default approaching in only weeks, the Republican Senate leader, Mitch McConnell of Kentucky, has given his support for granting a short-term extension of the government's borrowing capacity after spearheading strong GOP opposition to a lengthier extension of the borrowing authority.

The president responded as President Joe Biden and other business leaders raised their worries that a default would disrupt government payments to millions of Americans and send the country into a recession.

Some members of McConnell's Republican caucus were dissatisfied with the GOP's capitulation to lift the blockade, for the time being, claiming that the nation's debt levels were unsustainable.

Senator Mike Lee of Utah stated just before the vote took place, "I can't vote to raise this debt ceiling, not right now, especially given the plans at play to increase spending immediately by another $3.5 trillion."

According to Sen. Ted Cruz of Texas, Democrats had been on "a road to capitulation" on the procedure used to raise the debt ceiling, "and regrettably, Republicans caved yesterday."

On the other hand, Sen. Lisa Murkowski of Alaska was among those who voted to terminate discussion and enable a vote on the legislation. "I’m not going to stand by and watch this train crash over the cliff,” she said.

Eleven Republicans voted to terminate discussion, putting the measure one step closer to being put to the vote on the floor of the House.

In the final vote on the proposal, however, no Republicans voted with the Democrats.  As a result, McConnell has said that the majority party will be required to raise the debt limit on its initiative.

To meet the October 18 deadline, lawmakers have just a few days to act, after which the Treasury Department has warned that it would soon run out of money to deal with the nation’s already-increasing debt burden.

The legislation is expected to be approved by the House next week.

Republican leaders labored throughout the day to get the ten votes they needed from their party to move the debt ceiling extension to a final vote, convening a secret meeting late in the afternoon to discuss their strategy.

Sen. Josh Hawley of Missouri described the debate as “lengthy” and “heated” in the chamber.

McConnell allowed for an exchange of all points of view before informing the senators that he would vote yes to keep the discussion minimum.

The vote began with McConnell and South Dakota Sen. John Thune, the second-ranking Republican, standing by patiently. At the same time, nine of their Republican colleagues arrived one by one and gave the much-anticipated thumbs up. “I thought you were uncertain,” McConnell said after Cruz cast his vote against the bill. “Thank you for making an effort to attend.”

As an indication of Biden’s support, the White House’s senior deputy press secretary, Karine Jean-Pierre, said the president would sign a bill to increase the debt ceiling if it cleared Congress.

“It provides us with some breathing space from the terrible default we were on the verge of experiencing as a result of Sen. McConnell’s choice to play politics with our economy,” she said, taking a dig at the Republicans.

The announcement of the deal prompted a small rally on Wall Street on Thursday.

A sequel of sorts will take place in December, when Congress will face a series of deadlines, including funding for the government and raising the debt ceiling before returning home for the holidays.

The $480 billion rises in the debt limit are the amount the Treasury Department has said is necessary to ensure that the country is debt-free by December 3.

“I am grateful to my Democratic colleagues for working together to resolve this Republican-created crisis,” said Senate Majority Leader Chuck Schumer of New York in a statement.

As Leader McConnell and others of his conference fought to keep our caucus together, we successfully pulled our nation back from the precipice that Republicans attempted to drive us off of.

McConnell, on the other hand, viewed things very differently.

As McConnell put it on Thursday, “the route our Democratic colleagues have chosen would save the American people any immediate catastrophe while finally eliminating the majority’s excuse that they lacked time to handle the debt ceiling via (reconciliation).” “At this point, there will be no doubt: they will have plenty of time.”

The Senate Republicans, led by McConnell, continue to demand that the Democrats increase the debt limit on their own to avoid a government shutdown.  Moreover, Senate Majority Leader Mitch McConnell has insisted that Democrats use the same time-consuming legislative process known as reconciliation that they used to pass a $1.9 trillion COVID-19 relief bill and that they are currently using to try to pass President Joe Biden’s $3.5 trillion bill to boost safety net, health, and environmental programs.

Earlier this week, President Joe Biden rallied business leaders to call for an immediate suspension of the debt ceiling, claiming that the approaching deadline posed the risk of a historic default that would be “like a meteor” that would crush the United States economy and cause waves of damage around the world.

Republican senators have threatened to filibuster any attempt to lift the $28.4 trillion limit, who spoke at a White House event on Wednesday.

To make his case, Biden relied on the credibility of business America. This sector has historically sided with the Republican Party on tax and regulatory issues. The CEOs of Citi, JP Morgan Chase, and Nasdaq came together in person and electronically to declare the debt ceiling must be raised.

“It's not right, and it's dangerous," President Joe Biden said of Senate Republicans' refusal to compromise.

For more than a decade or more, increasing the debt ceiling has been a politically fraught issue, with Republicans, in particular, using it for railing against government spending and the growing financial burden on the nation's shoulders.