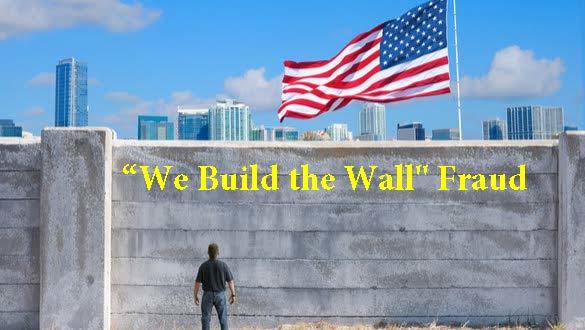 Many believe Steve Bannon’s indictment explains why Attorney General Bill Barr was in such a rush to fire and replace Geoffrey Berman as the head of the SDNY.

Steve Bannon Newsmax TV host of its nightly show “War Room,” which offers a psychotic heavy conspiracy far right-wing political analysis, was arrested this morning. Bannon has been indicted along with three others for allegedly defrauding donors to a $25 million fundraising campaign to build a wall along the southern border by Federal prosecutors from the Southern District of New York (SDNY).

The Acting US Attorney for the Southern District of New York Audrey Strauss said Steve Bannon, Brian Kolfage, Andrew Badolato, and Timothy Shea were arrested Thursday morning. Bannon, 66, was taken into custody by agents from the U.S. Postal Service, a law enforcement source said and is set to appear before a federal judge in Manhattan.

Ironically, President Trump in a July tweet referenced this privately constructed section of “Wall” built by this “private group which raised money by ads.”  Trump said, “it was only done to make me look bad, and perhaps [sic] it now doesn’t even work. Should have been built like rest of Wall, 500 plus miles.”

Trump, of course, has not built 500 miles of Wall. Monies authorized by the Obama Administration was used to refurbish 300 miles of the southern border fence and has built just three miles of new Wall.

Others involved in this “We Build the Wall” project that now appears to be an elaborate scam include former Kansas Secretary of State Kris Kobach, Sheriff David Clarke, and Curt Schilling, none of whom were named in the Federal indictment.

The four men named in the indictment made public today are accused of defrauding hundreds of thousands of people who donated to the “We Build the Wall” fundraising campaign that raised more than $25 million to build a wall along the U.S.-Mexico border, according to the indictment.

Federal prosecutors in today’s released indictment say donors were repeatedly assured that 100% of the money raised would be used to build the Wall. Still, those claims say SDNY prosecutors were false. Kolfage, Badolato and Bannon allegedly signed off on those assertions knowing that donors would be encouraged to donate if they believed all funds were going toward wall construction.

According to the criminal indictment of Bannon and the three others alleges...

“Some of those donors wrote directly to Kolfage that they did not have a lot of money and were skeptical about online fundraising campaigns, but they were giving what they could because they trusted Kolfage would keep his word about how their donations would be spent,”

Instead, the Justice Department indictment claims all four of the men profited from the fundraising scheme.

Bannon, one of Newsmax TV far-right-wing hosts allegedly received more than $1 million from “We Build the Wall,” which was funneled through a nonprofit he controlled and some of which was used to cover his personal expenses and pay Kolfage.

According to SDNY indictment, Kolfage, who organized the campaign, received more than $350,000 from money donated to “We Build the Wall,” which he then used to pay for “home renovations, payments toward a boat, a luxury SUV, a golf cart, jewelry, cosmetic surgery, personal tax payments, and credit card debt.”

To hide the payments from the fundraising campaign, federal prosecutors said the four men routed money through the nonprofit and a shell company controlled by Shea. The men concealed the money using fake invoices and fraudulent vendor arrangements to ensure the scheme remained confidential, according to the indictment.

“Although “We Build the Wall” spent money on the construction of the border wall, hundreds of thousands of dollars were siphoned out of We Build the Wall for the personal use and benefit of Kolfage, Bannon, Badolato, and Timothy Shea,” federal prosecutors said.

Under an arrangement reached by Bannon, Kolfage and Badolato days after the fundraising campaign was launched, Kolfage was to be secretly paid $100,000 upfront and then $20,000 per month, according to the SDNY indictment.

To keep the deal out of public view, Bannon agreed to funnel payments from We Build the Wall to Kolfage through the nonprofit he controlled. This is known as “structuring” and could lead to RICO and income tax charges being added to the indictment, charges at a later date.

Kolfage received the $100,000, as stipulated by the agreement with Bannon and Badolato, in February 2019. For the next two months, Kolfage was paid $20,000 in what federal prosecutors described as a “monthly salary,” according to the indictment.

Beginning in April 2019, Kolfage received subsequent $20,000 payments through other third-party entities that purported to be vendors for We Build the Wall, federal prosecutors said.

According to the indictment, the men learned “We Build the Wall” was under federal criminal investigation in October 2019 and “after that took additional steps to conceal the fraudulent scheme.”

While President Trump could come to Steve Bannon’s rescue with a pardon for all four men, its more than likely that these same charges could be made by Cyrus Vance Jr., the Manhattan DA, or the New York State Attorney General Letitia James. The four could then be at risk of being incarcerated in NY state prison rather than a federal penitentiary because the prison conditions are so much worse.  A pardon by Trump, even after the election, is not likely.

Another irony, Cyrus Vance Jr., appears to be on the verge of indicting President Donald J. Trump, his company Trump International and a handful of its executives. Steve Bannon and his three accused accomplices could very well wind up in the same New York State prison as President Trump.