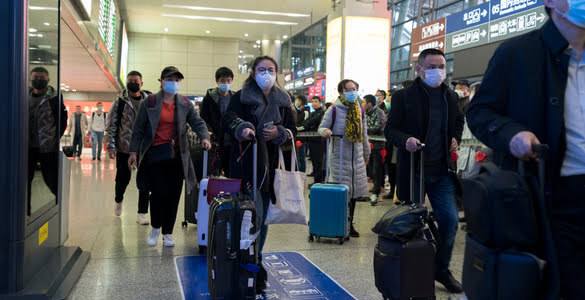 Following the removal of the United States from a list of countries where residents are permitted to travel without being subjected to coronavirus testing or quarantine, the European Union last week opened the door to a slew of new rules, restrictions, and roadblocks for tourists and business travelers.

Each member nation of the bloc is putting in place its own set of policies.

Sweden has banned all non-essential travelers from the United States.

Vaccinated visitors from the United States must isolate after landing in the Netherlands, while unvaccinated passengers are not permitted to enter.

The increase in coronavirus-related fatalities and hospitalizations in the United States has prompted several nations to impose additional restrictions, including Bulgaria, Italy, the Netherlands, and Sweden. The list is sure to expand in the future.

The European Union's proposal to reimpose restrictions on unvaccinated U.S. visitors is not legally obligatory, and many European countries have yet to take action due to it.

It is possible that some may opt to completely disregard it, causing uncertainty for passengers.

When it comes to inquiries regarding requirements in a specific European Union member state, the best answers are generally available on the website of the United States Embassy in that country.

The majority of countries, notably France, Spain, and Germany, continue to welcome visitors from the United States with little fuss.

For a few individuals, the situation is different, and here is where the misunderstanding begins.

For example, according to the United States Embassy in Sofia, any visitor from the United States, regardless of nationality, is banned from entering Bulgaria "unless they satisfy an exemption."

Students with a visa, citizens of European Union countries, foreign diplomats, and medical professionals are among those who are exempt from the rule.

Meanwhile, the United Says Embassy in Rome states that visitors who have been vaccinated must undergo a virus test 72 hours before arrival and that those who have not been immunized must isolate for five days.

France does not impose any travel restrictions on tourists from the United States, but a "health permit," which is based on testing or evidence of immunization, is required to enter cultural events, restaurants, and pubs, among other locations.

These disparate measures, which can be confusing to non-Europeans, reflect a reality that the pandemic has exacerbated: while the European Union strives to present a unified front on many issues, the bloc is comprised of 27 member countries with diverging — and sometimes competing — interests, as well as countries with varying epidemiological situations. The pandemic has only exacerbated this reality.

Following the closure of the European Union's external borders in March of last year, the E.U. encouraged member states to reopen their borders to visitors from the United States and other countries in June, in the hope that a resurgence in tourism would help to stimulate the economies of the member states.

Nonetheless, some nations had already taken action, while others were waiting for suggestions from European Union authorities.

When it comes to the new travel restrictions, a similar situation is at play.

And the difficulties don't only apply to passengers from the United States or other non-European nations; several member states have taken additional steps to make it easier for travelers from other European Union countries to go through customs.

Apart from that, even though the more transmissible Delta form of the virus is becoming more common in Europe, case numbers throughout most of the continent have not yet recovered to levels similar to those seen in the United States. While the virus's transmission differs from state to state in the United States, different outbreaks occur in different European Union member nations.

EU Will Reimpose Travel Restrictions on the U.S. Travelers