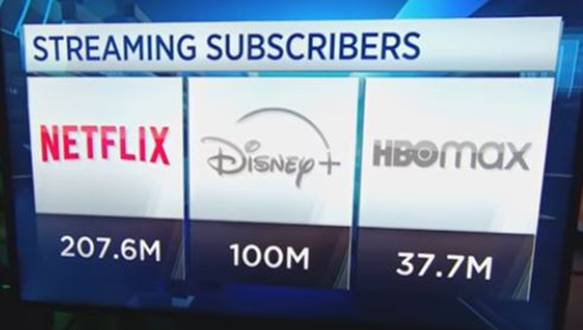 Netflix (NFLX) best days may be behind it thanks to an incredible number of viable contenders dead set on grabbing market share from the streaming giant,

While first-quarter subscriber growth saw 3.98 million additional subscribers, the numbers of its customers were sharply less than Wall Street’s analysts’ expectations. In fact, user growth is slowing even faster than had been anticipated. 2021 will clearly not be a banner year like 2020 was. For one thing, the pandemic isn’t locking people in their homes and creating the same captive audience.

As a result, Netflix shares have sunk about 10% in late trading following the earnings and business results.

During the worst of the 2020 pandemic nightmare, Netflix became known as one of the best “stay-at-home” trades, one of the stocks that have benefited from consumers spending much more time locked up indoors during the pandemic. It’s no surprise now that the pandemic has been leveling off and allowing people to leave their homes more often for entertainment. Not only has the momentum slowed, but it’s also now shifting to a declining market as more areas of the economy reopen, and several well-financed streaming companies with national brands are eating into Netflix’s market share.

Keep in mind Netflix’s disappointing first-quarter paid streaming additions of 3.98 million subscribers compares to a quarterly record of 15.8 million new paying users in the first three months of last year (2020). This caused the company to miss its own guidance from January 2021 that estimate subscriber growth to increase by 6 million new subscribers for the first quarter. 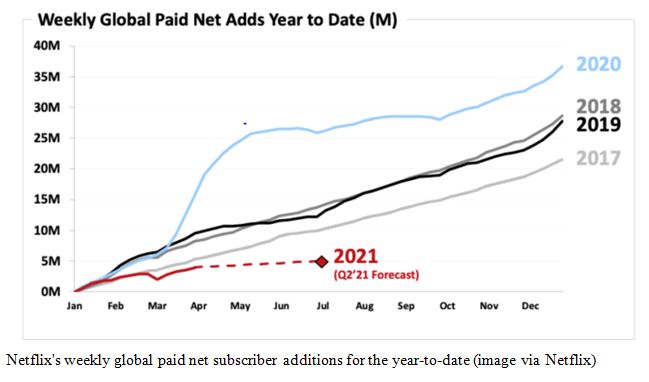 Netflix said in a letter to investors on Tuesday…

“We believe paid membership growth slowed due to the big COVID-19 pull forward in 2020 and a lighter content slate in the first half of this year, due to COVID-19 production delays,”

“We continue to anticipate a strong second half with the return of new seasons of some of our biggest hits and an exciting film lineup. In the short-term, there is some uncertainty from Covid-19; in the long-term, the rise of streaming to replace linear TV around the world is the clear trend in entertainment.”

Wall Street’s analysts recognize the growing competition Netflix faces from an increasing list of competitors in the streaming entertainment space; many had ramped up their rollouts and advertising during the stay-at-home periods of the Covid-19 pandemic.

Consider HBO Max, owned by AT&T (T), reaching 41 million U.S. subscribers a whopping two years ahead of schedule in January of this year. And Disney+ (DIS), a formidable streaming competitor’s service, has seen 100 million global subscribers as of early March. That compares favorably to Netflix’s 208 million worldwide subscribers that have taken place within a year-and-a-half of its launch.

“I think people are going to start to see that the jig is up on Netflix,” New Constructs “It’s just not nearly a profitable enough enterprise to compete with the likes of the movie studios, and in particular Disney, which has multiple ways to monetize content. Netflix has one way – streaming over the internet.”

No one can deny that Netflix has a robust content pipeline of new content to offer in 2021. The quality and content of its programming are a crucial differentiator between the 23-year-old company and its newer streaming competitors.

In the second quarter of this year, new series including “Shadow and Bone,” “Jupiter’s Legacy,” and new seasons of “Who Killed Sara?” and “Lucifer” are scheduled for release.

Will Netflix become increasingly efficient from an operating standpoint? It may be able to hold its current subscriber base with its ambitious and efficient use of billions of dollars to keep its content creation despite the ongoing pandemic. Netflix has reiterated it believes it is “very close to being sustainably” free cash flow positive after posting its first full year of positive free cash flow since 2011 in 2020. It expects free cash flow to be around breakeven in 2021 and insists it “no longer needs to raise external financing” for its day-to-day operations.  BMO Capital Markets analyst Daniel Salmon wrote in a note Friday.

“While ‘tough comps’ have kept Netflix in check, we think their passing will refocus investors on the ‘new plateau’ in streaming and the emerging FCF [free cash flow] and capital return story.” This assessment is not necessarily a positive. Netflix as a growth stock has been a huge magnet. Entering a period where it becomes a “dividend and positive earning play” won’t give it the kind of multiple that justifies its current lofty price at $504 a share has a PE ratio of 61.66. Justifying a PE of 25 may be problematic going forward now that growth has slowed to a crawl. That would mean Netflix may have a downside of 50%, even 60%, in the next two years.