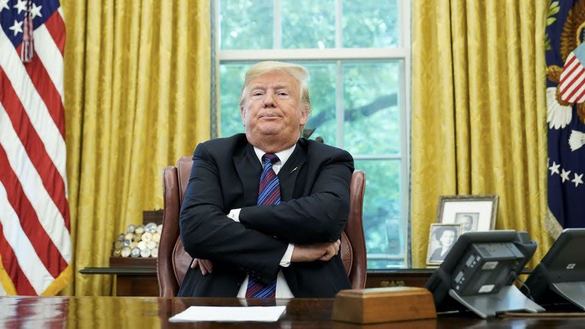 The Sunday Morning host of the longest-running Sunday morning news T.V. show had been under constant attack by viewers for "walking the line" and never quite pointing out the lies, criminality, sedition, and possible treason President Trump has been delivering to the American people after being elected in 2016.

The host of Meet the Press on Sunday finally seemed to have enough. In a ruckus interview on Sunday, he accused Wisconsin Sen. Ron Johnson of hypocrisy, double standards, and working to undermine faith in our country's most valuable principle, democracy.

Todd attacked Johnson for joining a GOP effort to challenge the certification of Joe Biden's presidential election victory on January 6, 2021, without any evidence. Instead of addressing the President's extensive history of lying, deceiving, violating one law after another, Johnson instead went into full what-about defending his and President Trump's dishonesty.

Sen. Ron Johnson's defense was so off the wall that it frustrated Chuck Todd so much he asked Johnson…

"How about the moon landing? Are you going to hold hearings on that?"

Johnson, along with at least 11 other sitting or newly elected senators, including Ted Cruz of Texas and Josh Hawley of Missouri, has said they'll resist President-elect Joe Biden's certification in a joint session of Congress on January 6, 2021. At this point, 140 Republican House Republicans members of the House of Representatives are also planning to overturn the election results.

Todd pointing out that fears that the election result was somehow rigged were nothing more than the feedback being generated by President Trump and his sycophant's baseless and nonstop repetition of alleged fraud without a shred of evidence, became so enraged; accused Johnson…

"You’re the arsonist here,” “President Trump is the arsonist here. You started this fire, and now you’re saying, whoa, look at this, oh my god, all these people believe what we told them because you didn’t have the guts to tell the truth, that this election was fair.”

Sen. Johnson, in response, accused the mainstream media of working to overthrow Trump throughout his administration…

Both Todd and Johnson told each other they’ve “had enough” of those arguments but then rapidly circled back to them. Johnson was choosing to ignore President Trump's reckless, illegal behavior and the strong evidence presented by the Mueller investigation that accused Trump of 10 instances of obstruction of justice.

“The last two years are carrying a lot of crazy conspiracy water for President Trump.”

Todd asked Johnson if efforts to fight the certification of the Electoral College results were nothing more than “a cynical political ploy” in hopes of holding on to Trump’s base in Wisconsin to win re-election in 2022, knowing full well Trump’s accusations amount to a giant continuous lie.

“I’m trying to be transparent.”

“Just because you have somebody say it didn’t make it true.”

“You got to ask yourself when you tell people a million times that something was stolen or something was a fraud, and then they believe it; I think you need to look in the mirror.”

Johnson, who has no evidence to back up any of Trump’s fraud conspiracy allegations in the 2020 election, could do nothing but pound the table returning to the sickening repeated and baseless attack on the media…

“I didn’t criticize Democrats when they were talking about potential hacking of voting machines, but now it is quackery and conspiracy theory. Ignoring the fact that President’s own head of cybersecurity for the 2020 election; called this the most secure election ever held.”

Sen. Johnson’s then returned the baseless deflection used by Trump and his cronies…

“That’s the problem, Chuck. There is a double standard, and we’re not being transparent and dismissing the concerns of tens of millions of Americans. Again, I didn’t light this fire. This fire was lit over four years ago, and  you have destroyed the credibility of the news media by your bias.”

The New York Post, literally described by President Trump as the first newspaper he reads every day bombarded him and his sycophant supporters on December 27, 2020, with the following editorial comments which expose the election fraud argument as a farce…

“Unfortunately, you’re obsessed with the next day, January 6, when Congress will, in a pro forma action, certify the Electoral College vote. You have tweeted that, as long as Republicans have “courage,” they can overturn the results and give you four more years in office.”

“In other words, you’re cheering for an undemocratic coup.”

“You had every right to investigate the election. But let’s be clear: Those efforts have found nothing. To take just two examples: Your campaign paid $3 million for a recount in two Wisconsin counties, and you lost by 87 more votes. Georgia did two recounts of the state, each time affirming Biden’s win. These ballots were counted by hand, which alone debunks the claims of a Venezuelan vote-manipulating Kraken conspiracy.”

“Sidney Powell is a crazy person. Michael Flynn suggesting martial law is tantamount to treason. It is shameful.”

“We understand, Mr. President, that you’re angry that you lost. But to continue down this road is ruinous. We offer this as a newspaper that endorsed you, that supported you: If you want to cement your influence, even set the stage for a future return, you must channel your fury into something more productive.”

Of course, Trump is focused on raising hundreds of millions of dollars for a dark Political Action Committee that he will use for his personal use legally. In truth, he is amidst one of the biggest political scams in U.S. history.

Senator Johnson will face the reality that many lies about the 2020 election and the Trump administration are heading full steam ahead into a megaphone problem in 2021. Many social media platforms will likely drop President Trump and many of his sycophants who have been lying for the last four years with little interruption and policing.

The ability to magnify Trump’s lies will not only be kneecapped after January 20, 2021’s inauguration of President Trump. Especially if he finds his business and or himself indicted by Manhattan DA Cyrus Vance, who will now have access to all of his business records he has been seeking.

Unless Trump is pardoned by Vice President Pence in a last-ditch maneuver, his title is going to change from “President” to “Defendant.”

Keith Olbermann is being very direct and is telling it like it is. Those who support the challenge to President-elect Biden violate Section 3 of the 14th Amendment to the U.S. Constitution….

“They have given aid to the enemies of the constitution of the United States.”