Hell appears to be freezing over as the state of Texas seems to be moving toward a victory on November 3, for former Vice President Joe Biden. According to the latest release, NBC News Poll Texas has moved from the lean Republican” category to “toss-up,” according to the network’s political unit.

A win by former vice president Biden in Texas would amount to a political earthquake. More than a few million Texans are saying such a victory would be equivalent to hell freezing over. NBC political analysts have also already moved the very conservative states of NBC’s toss-up category, including Iowa, Florida, Georgia, North Carolina, and Ohio.

NBC pushed Arizona on Tuesday into their “lean Democrat” category.  Arizona is at the center of a tightening race for the U.S. Senate between sitting Senator Republican Sen. Martha McSally and her challenger Democratic challenger Mark Kelly, a former Astronaut and fighter pilot who is married to former congresswoman Gabby Gifford.

NBC also lists another six states as leaning toward Democrats, according to NBC. Those include Michigan, Minnesota, Nevada, New Hampshire, Pennsylvania and Wisconsin. If the former vice president wins these five states plus Arizona, he will become the United States’ 46th President.

Assuming NBC has this presidential race right, the former vice president will win a minimum of 279 electoral votes, more than the 270 required to win the presidency. That would also be a slight improvement for Democrats than their 2016 when NBC predicted Democratic presidential nominee Hillary Clinton would win 274 electoral votes.

NBC wrongly predicted Michigan, Pennsylvania and Wisconsin would vote for Clinton that year while calling Florida, Georgia, and Ohio toss-ups in 2016.

According to NBC’s projection this year, President Donald Trump will win 125 electoral votes, leaving 134 electoral votes from toss-up states on the board. That compares to 170 electoral votes the network called for Trump in 2016 and 94 toss-up votes.

President Trump’s belief that his chances of re-election is a long shot. On Tuesday, President Donald Trump sent out a bizarre tweet in which he encouraged early voters to go back to polling places and demand that they be allowed to change their votes to him. Here’s Trump’s Tweet…

“Strongly Trending (Google) since immediately after the second debate is, CAN I CHANGE MY VOTE?” the president wrote on Twitter. “This refers to changing it to me. The answer in most states is YES. Go do it. Most important Election of your life!” 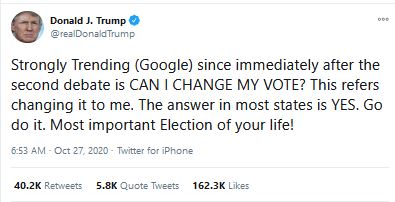 The current polling averages suggest President Trump is currently losing to Democratic rival Joe Biden by between eight and nine points, according to Real Clear Politics and FiveThirtyEight.

The chances of changing your vote even in the small numbers of states where it is allowed are so incredibly hard to do that President Trump’s Tweet makes him look extremely desperate.