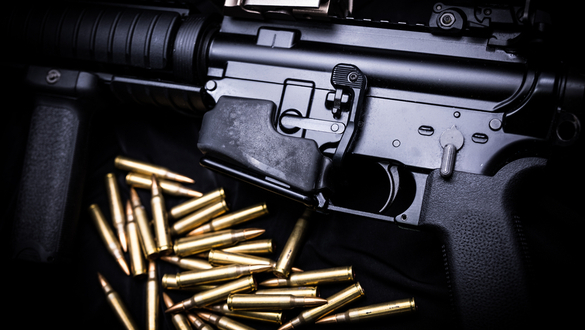 Hell may have finally frozen over!

Rupert Murdoch’s The New York Post shocked many political observers and most New Yorkers today by suddenly doing a backflip on gun control by running a no-nonsense cover.  Also, he op-ed the publication’s editorial board calling on President Trump to stand up to the National Rifle Association (NRA) and appeal to Americans, including gun owners, who are “appalled by the endless string of mass shootings” by banning assault rifles and weapons of war… 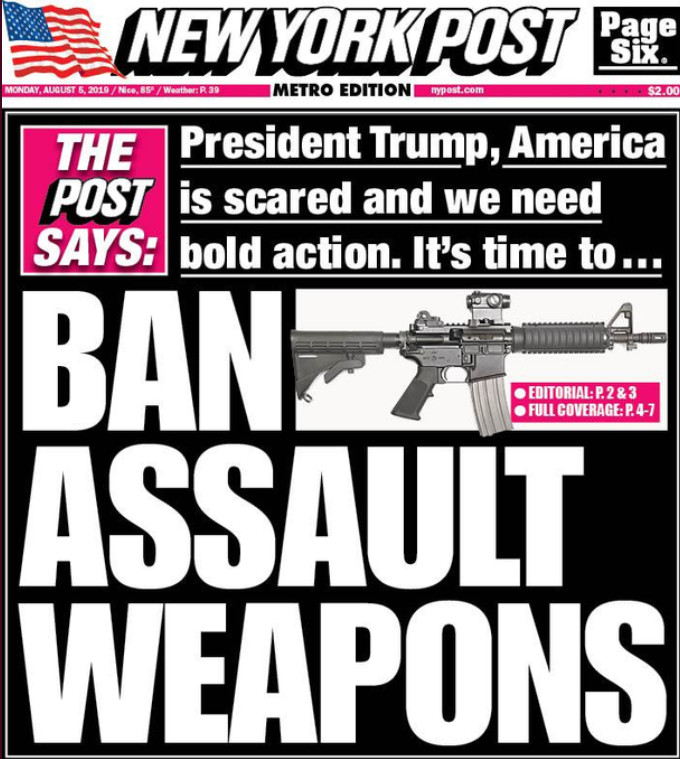 “People all across the nation are scared; many feel like the country is spinning out of control…They’re looking to their leaders for more than prayers. America is terrified.”

“President Trump, you are positioned to assuage that fear. On gun control, you are a pragmatic centrist, someone who knows there is a vast majority of Americans who are not to the extreme left or right on this issue. They want the killings to stop. ... Come up with answers. Now. Beginning with the return of an assault-weapons ban.”

The call to action by the Post’s editorial board is a far stronger than just calling for the passage of background checks, closing the gun show and direct mail loopholes, and extending waiting for periods legislation that has been stalled by Senate Majority Leader Mitch McConnell now nicknamed #MoscowMitch.

However, President Trump is likely to ignore Murdoch’s editorial boards call to action unless the publisher and his family push the same message through Fox News and its talk shows including Fox and Friends. Without the complete support of Fox News in 2020, Trump’s chances of re-election fall dramatically.

The NRA is up to its neck in scandal and plagued with financial problems that will make it impossible for it to contribute, much less contribute the $30 Million many believe was funneled through the gun lobby by a Russian Oligarch.

President Trump’s Monday has been quite a nightmare. Waking up to The New York Post front page was compounded with what has turned in a route on the U.S. financial markets that has sent gold soaring and currency markets into chaos. The Dow Jones has fallen almost 800 points as of 1:15 PM EST (settling at a loss of 760) on news that China is going to let the Yuan float in the free market sending it to a decade low this morning. Also, China will end all purchases of U.S. Agricultural purchases.

Trump’s response was to accuse China of committing currency manipulation and to beg the Federal Reserve to cut interest rates again. However, allowing your currency to fall and taking no action to buttress its value is not currency manipulation, it’s a free market finding equilibrium in response to President Trump’s imposition of Tariffs that are in reality import taxes being imposed by the U.S. on its businesses and citizens. 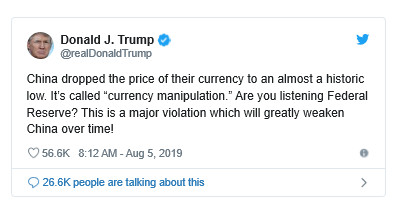 Some conservative analysts are arguing that Trump is extending the trade war so he can settle it just before the 2020 election. That argument is just plain stupid. Global economic growth is slowing, and U.S. economic growth could fall well below 2% in the next six months. The Chinese may also choose to undermine Trump’s re-election by refusing to negotiate until after the 2020 Presidential election.

Trump was warned not to threaten the initiation of import taxes on the remaining $300 billion last year because he gave his word to Xi he would stand pat during the June face to face during the G20 meeting in Japan, and to give negotiations a chance.

Instead, Trump attacked China and Xi as his negotiators were on route to reopen negotiations with China in Shanghai.  When the Chinese delegation landed in Shanghai they were greeted with the bums rush and sent back to Washington in less than 48 hours with the promise the Chinese would open negotiations in September; A clear indication that President Xi was upset about Trump’s Twitter rants, and wanted to show his displeasure by stalling negotiations.

President Trump didn’t recognize the signal and went right at raising his import taxes. The consequences could end up being no deal until the next President is sworn in and Trump facing a myriad of criminal indictments.

The mass slaughter in El Paso and Dayton Ohio could also prove to be the death of Trump’s re-election chances. It will embolden Democrats to come out for an official impeachment inquiry and could be used to slow down aid to farmers in deep-red states in the House of Representatives, which could allow aid to reach blue and purple states. Trump used this strategy to punish blue states with his 2017 tax bill.