Mueller Testifies President Trump was NOT Cleared of Wrongdoing! 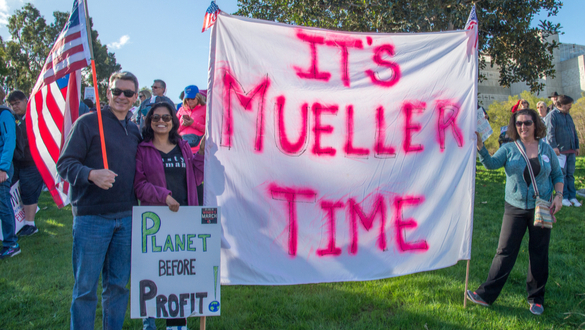 Everytime President Trump has claimed, “no collusion” or “no obstruction,” he has lied to the American people. That alone is an impeachable offense, even before his ten instances of obstruction of justice.

The chances of a full-blown impeachment hearing for the removal of President Trump increased dramatically this morning when special prosecutor Robert Mueller declared at the opening of congressional hearings into his investigation into Russian interference in the 2016 presidential campaign, that President Donald Trump's claims that Mueller’s investigation had exonerated him of wrongdoing.

The President’s constant assertions of “no collusion,” “no obstruction” and that he “was cleared by the Special Prosecutor Mueller’s investigation” are all lies and as a result, are impeachable offenses. One only has to read Article 1 prepared for the impeachment of President Nixon, which leads to the following summary…

In all of this, Richard M. Nixon has acted in a manner contrary to his trust as President and subversive of constitutional government, to the great prejudice of the cause of law and justice and the manifest injury of the people of the United States.

Wherefore Richard M. Nixon, by such conduct, warrants impeachment and trial, and removal from office that was adopted 27-11 by the Committee on the Judiciary of the House of Representatives, at 7.07pm on Saturday, 27th July 1974.

President Trump finds himself as a result of his lies over and over about being exonerated by the Special Prosecutor to the American people.

As a result of his lying President Trump has acted in a manner contrary to his trust as President and subversive of constitutional government, to the great prejudice of the cause of law and justice and the manifest injury of the people of the United States.

Each occurrence of obstruction of justice is a felony that any other U.S. citizen would be prosecuted for, and punished with jail time in Federal Prison.

Not a single question by Republican representatives today did anything to bring these facts into question. Instead, they focused their questions on how the investigation started, which Mueller pointed out, occurred before his appointment by Deputy Attorney General Rod Rosenstein.

Mueller denied he was being interviewed the day be for his appointment to being the Special Prosecutor in this matter, for another ten-year term to head the FBI. He indicated he went to meet with Trump to provide his insight on who might be a good replacement for James Comey.

Mueller will testify later today in front of the House Intelligence Committee where it is expected he will be submerged in a smokescreen again with questions from its Republican members as to how and why the Russian investigation began. Expect the Democrats to ask questions that demonstrate President Trump has lied repeatedly about being cleared by Mueller’s report.

To get full access to all the witnesses the House Judiciary wants to call, it is believed by most observers the House of Representatives must vote for an impeachment inquiry to begin. Most legal scholars agree the courts will expedite objections and claims of executive privilege and compel witness appearances and document production.

Currently, only 90 members of Congress are on record that they want an impeachment inquiry opened.