Mr. Pillow's Lies Will Bankrupt Him and His Business 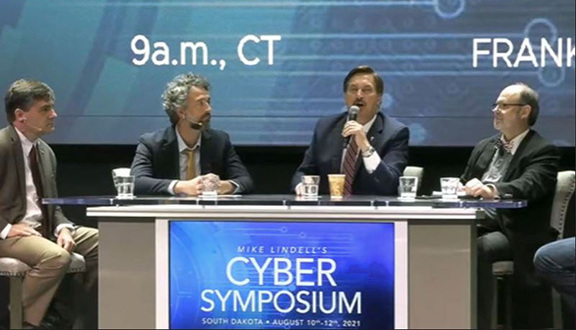 Mike Lindell's Cyber Symposium was so catastrophic that even his pal conman Steve Bannon had to admit the pillow magnate failed to prove the 2020 election was stolen from former President Donald Trump.

Thanks to his disastrous "Cyber Symposium’, Dominion Voting System's lawyers must be elated over their chances of winning a $1.3 Billion judgment against Mike Lindell. Especially after Lindell fails to produce either the companies voter machines he repeatedly insisted he had possession of; and his inability to make a shred of evidence that a single vote had been challenged by Chinese hackers, much less anyone.

Lindell's claim that he was assaulted by a member of Antifa at the hotel in South Dakota was also proven to be a lie by his own admission. Thus further damaging his credibility and showing his continued pattern of compulsive lying.

Lindell's newest claim attributing his inability to produce a single shred of evidence as the result of a conspiracy between Antifa and mainstream news networks during his latest interview with Steve Bannon could be a legal bonanza for Dominion.

The total lack of evidence presented by Lindell at his cyber symposium dramatically undermines any defense against the claims made by Dominion Voting Systems in its $1.3 billion lawsuits against the pillow magnet, Rudy Giuliani and Sidney Powell.

Despite the catastrophic failure of his cyber symposium Lindell remains so delusional, he's actually claiming his "Cyber Symposium' was a success beyond his wildest dreams.  Lindell boasted to Steve Bannon, who trashed the symposium live from the event. Lindell said about the cyber symposium…

"It's probably 3X what I wanted it to be because we found out all the internal people, we had Antifa there, we found out media outlets that were involved, we're exposing all that as this story goes this week, there was media involved with Antifa, we've uncovered them!"

Lindell's lawyers must have warned him not to accuse anyone or any media outlet by name. So Lindell stuck with blaming unnamed Antifa members for conspiring with unnamed mainstream media outlets for sabotaging his symposium.

While making his ridiculous and unprovable claims, Lindell left out the fact that he was tricked into buying worthless bogus evidence he acquired from Dennis Montgomery, who has gained notoriety in recent years as a conman extraordinaire.

The latest interview by Bannon helped him pull off his fact-free accusations by avoiding any tough questions challenging the pillow magnets for any specifics, and his tenuous hold on reality.

Bannon's interview with Lindell never even came close to mentioning his own scathing recognition at the symposium failed to offer any evidence.

Bannon also altogether avoided any question of Lindell about his being possibly scammed by Dennis Montgomery.

Bannon also avoided asking Lindell about the repeated technical glitches caused by his incompetent technology staff. Instead, Bannon allowed Lindell to push the lie that the technical difficulties were caused by unnamed Antifa members who conspired with unnamed mainstream media outlets.

Trump Next Rally is already a HUGE FAILURE