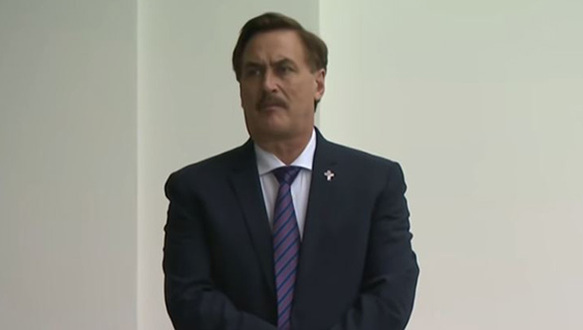 Mike Lindell, known as Mr. Pillow, has repeatedly guaranteed that the U.S. Supreme Court would overturn the 2020 election and order the re-installation of Donald J. Trump to the Presidency of the United States. This will happen by Thanksgiving Day.  Stay Tuned!

We have wondered several times if Mike Lindell is back on crack. He has repeatedly guaranteed he would produce incontestable evidence that the 2020 general election was stolen from former twice impeached and disgraced President Trump. Yet, every deadline he has set, every claim of having incontrovertible evidence proving his claim - has been proven to be a lie.

His latest promise that he would file a lawsuit directly with the Supreme Court that would compel all 9 Justices to order Trump re-installed as President appears to be another example of his proving himself to be a delusional putz.

Once again unable to deliver on his promise after swearing he has lawyers preparing the Supreme Court lawsuit as late as last week, he's now manufacturing a litany of excuses for the failure of his guarantee to materialize.

Lindell now dares to claim to have missed that goal because Republican National Committee Chairperson Ronna McDaniel silenced him. He is choosing to overlook all of his media appearances and promises in the run-up to Thanksgiving, as well as his admission that he has never seen the so-called proof that the lawyers were going to use to persuade the Supreme Court to overturn the 2020 election.

Lindell now alleges the reason he will once again look like a moronic putz is - a last-minute pressure campaign orchestrated by the RNC and the Chairwoman of the RNC McDaniel that prevented his case from moving forward and "saving the country."

Remember that McDaniel and the RNC have shown their commitment to the former President by covering his legal expenses in defending himself and business battling New Yorks's Manhattan DA at the cost of $120,000 a month. Lindell is ignoring that reality insists…

"We believe that they have reached out to multiple [attorneys general] and put pressure on them, not to sign the Supreme Court complaint," Lindell said Monday on his evening live-stream, this time from aboard his private plane as he scrambled to lock down the signatures required to file his complaint with the high court.

His claim amounts to a delusional alternate reality. Lindell blasted McDaniel during a live-streamed rant, alleging she orchestrated a vast Republican conspiracy against him. She finally acknowledged late last week, joining Chris Christie and dozens of other influential Republicans that President Joe Biden won the 2020 election.

Never mind, there was no way a case filed for the first time would be accepted by the Supreme Court. Never mind, he has never seen the evidence a guaranteed would overturn the election. Instead, he's trying to divert attention from his delusional putz by making up an attack on the RNC, saying…

"How dare the RNC try and stop this case from getting to the Supreme Court. Shame on you, RNC! You are worse than Fox [News] now!" he stated, referencing his claims that the cable giant has silenced him. "You can't tell me why Ronna McDaniel, the head of the RNC, made a statement saying Biden won three days before this Supreme Court complaint was supposed to go to the Supreme Court."

"What about the timing of that, America!"

Any coherent person understanding our judicial system knew Lindell was so intellectually challenged when making his guarantees and that the RNC and McDaniel have nothing to do with Lindell's ridiculous guarantees not coming true.

With all his accusations, Lindell has just admitted that numerous Republican attorneys general that he insisted were on board are now telling him to seek a time extension on his Tuesday deadline before they signed their names to his filing?" Lindell's claim that these GOP Attorney Generals who had, according to him, had already signed his imaginary lawsuit has suddenly asked him…

"Can we get more time in recent days?"

In his online video discussing once again his failure to deliver on his promises, Lindell, in a painful scream over the roar of his plane's engines, argued that if the predominantly Republican state attorneys general ultimately refuse to sign onto his Supreme Court filing, the pillow baron—never one to back down from a delusional pursuit—has a backup plan. Lindell said…

"We do have a copy of the complaint."

… that he would release to the public on Thanksgiving Day if it ends up not being filed due to a lack of signatures.

"Worst-case scenario, let's say, a lot of them want to delay signing it."

Again not realizing even the Supreme Court's basics, Lindell believes that by releasing the so-called complaint, his fervent supporters would then mount local pressure campaigns against their own state attorneys general after seeing the contents of his filing.

If that wasn't enough from the pillow putz claimed late Monday that he was making a last-minute sprint across five states in the dead of night to convince attorneys general to sign his papers…. asserting if they don't sign by Tuesday, he could always try to get them to sign by Wednesday…

"Worst-case scenario because what is going on out there with the RNC, shame on them. How dare they?"

Virtually every example of so-called voter fraud has turned out to have been committed by Republicans in Nevada. This past week, leading to a conviction and jail sentence for a man who claimed his dead wife's vote was an example of fraud, only to turn out that he was the one who committed the fraud.

Lindell's unending crusade to prove voter fraud has been based on nothing but one lie after another.

Lindell's steadily guarantees that his investigations would prove his conspiracy theory and thus overturn the 2020 election have all been established based on his delusions. His self-imposed deadlines have repeatedly come and gone in each instance, including a deadline for Trump to be reinstated by early August.

Lindell's apparent insanity has led him to demonize and unlikely battle opponents, including right-wing behemoths like Newsmax and Fox News, as well as invisible foes like "antifa" insurgents at his unhinged "cyber symposium" this past summer.

If you're still a believer in Lindell, don't worry. He concluded his Monday evening live stream by promoting his 96-hour virtual "Thanks-a-Thon" event to kick off Wednesday night at midnight and feature four straight days of even more imaginary election conspiracies.

But if you were counting on his guarantee the U.S. Supreme Court will overturn the 2020 election as Lindell has promised by Thanksgiving, you should know there's no record of any filing from the state attorneys general or Lindell to accomplish his guarantee.

When The Daily Beast confronted Lindell about his non-existent Supreme Court filing and why it wasn't made public, the delusional putz fumed….

"Are you out of your mind? You call me again; I am suing you!"

In replaying in that way to a fair and legitimate inquiry from that news, the bureau proves he's mentally challenged or back on the crack pipe.