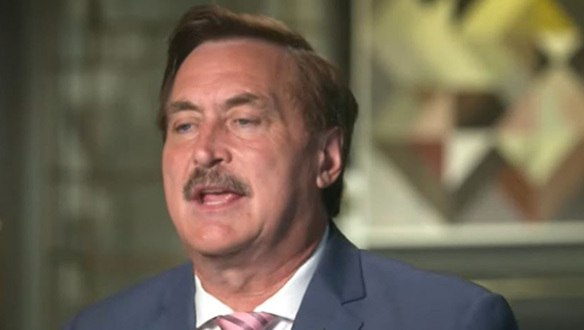 Mike Lindell, known as Mr. Pillow, is recovering crack addict who doesn’t appear to be back on the drugs that almost took his life, but he certainly sounds like he’s on the pipe again. He dismisses unarguable facts presented to him with a religious fervor that disprove his allegation that China hacked the 2020 election and deprived Trump of re-election.

The computer evidence Mike Lindell gave to CNN about two weeks ago that he insists proves China hacked the 2020 election and flipped votes from Trump to Biden was given to nine computer coding experts with Ph.D.’s by CNN. They all, after close examination, came to the same conclusion. The evidence is not evidence of anything.

When the CNN reporter Drew Griffin calmly explained the results, he began by saying…

“We gave the evidence to an expert to examine, and he said what you gave us isn’t evidence of anything. It was just routine meta-data.”

“Then you didn’t hire an expert.”

Drew Griffin then explained that not only did their expert discredit his claim the election officials were flawed, but votes were tampered with. The experts confirmed that the ballots in contested districts could not have been changed because their voting machines are not connected to the Internet and were cast by physical ballots.  These ballots were then audited by, in many cases, by Republican officials.

“Then they’re mistaken and have misconstrued.”

“You know the data could have been hacked after the election. Did you audit the votes? Who audited them? Who did you talk to?

Lindell then accused Griffen of repeatedly lying as if his repeating the accusation somehow made them true.

Lindell, it seems, hasn’t made any effort to confirm his allegations independently. If he had, he would know they were not susceptible to computer hackers in China or anywhere else in the world. This indicates that he will likely lose the lawsuit filed against him and his cross-complaint against Dominion Voting Systems. Finally, he could end up being crushed by a $1.5 billion judgment.

Drew Griffen’s CNN interview of Lindell also proves that no amount of evidence is ever going to be enough for Mike Linden to recognize that he’s a modern-day Don Quixote who is being duped by conmen who are charging him millions of dollars to feed him bogus evidence for no other purpose than to line their pockets with Lindell’s money.

Reporter confronts MyPillow CEO: You have proof of nothing