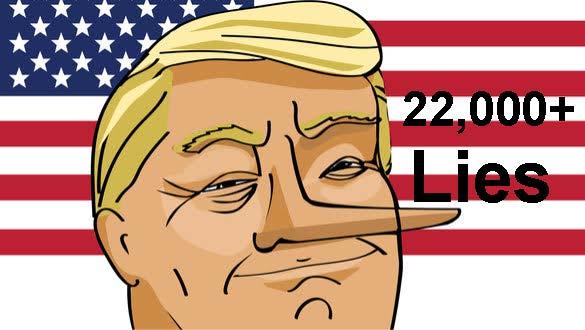 Despite his four deferments for bone spurs he didn’t have and sending someone else in his place to Vietnam using his father’s wealth and influence, Trump has no respect for American soldiers that died courageously in service to their country.

According to The Washington Post, which first reported, Mary Trump 15 hours recording of her talks with Maryanne Trump Barry in 2018 and 2019. Barry, 83, shared her opinion of her brother from his childhood to his presidency, calling him a "brat" and a "liar."

"All he wants to do is appeal to his base," Barry said of her younger brother in one excerpt of the recordings obtained by USA TODAY. "He has no principles. None."

"His goddamned tweet and the lying, oh my God," she said in another clip. "I'm talking too freely, but you know. The change of stories. The lack of preparation. The lying."

President Trump's solution for any controversy that exposes his mental illness, incompetence, pathological lying is to just lie and deny the truth “strongly” and to attack the messenger.

Trump’s response to The Atlantic story exposing his repeatedly denigrated and offering contempt for America’s war heroes is potentially a death blow to his re-election. His solution is to continue to deny his despicable behavior and an attack on the publication’s owner Steve Job’s widow, Laurene Powell Jobs.

On Sunday, President Trump called on his followers to swarm her with phone calls and letters in retaliation for that story. Jobs, widow of Apple founder Steve Jobs, is the founder of the philanthropic Emerson Collective Foundation, which acquired a majority stake The Atlantic in 2017. While she has exerted influence on the magazine’s business matters, she reportedly exercises no editorial control on the direction of the magazine.

While Trump was trying to muster an all-out attack on Laurene Powell Jobs, the editor-in-chief of the Atlantic, Jeffrey Goldberg, warned that more could be coming in the story about President Donald Trump’s attacks on American soldiers. Trump was exposed to calling those who died in battle “losers” and “suckers Goldberg told CNN Sunday…

“I would fully expect more reporting to come out about this and more confirmation and new pieces of information in the coming days and weeks.”

“We have a responsibility and we’re going to do it regardless of what he says.”

There’s no dispute that President Trump referees and uses anonymous sources when disparaging his political enemies. Yet Trump’s campaign only defense to The Atlantic story is that it cites anonymous sources and as a result, it can’t possibly be real.

The Trump defense is a charade, of course, because Fox News, the Associated Press, the New York Times, and CNN have all confirmed the sources are real.

Further, Goldberg explained on Sunday during a CNN interview that using anonymous sources like Woodard and Bernstein used “deep throat” to expose the Watergate Scandal. He went on to explain how the press does its job and can get information about things that happen behind closed doors…

“We all have to use anonymous sources, especially in a climate where the president of the United States tries to actively intimidate.”

Goldberg said about the sources…

“These are not people who are anonymous to me.”

“Almost all 200 of our stories about Watergate were based on anonymous sourcing.”

During the Trump era …

“Reporting is almost uniformly based on anonymous sourcing in part because that’s the only way we can get to the truth.”

Trump’s war room always goes on the attack against anyone who speaks out against the president. Supporters call in threats or try to discredit anyone daring to tell the truth about Trump. Many times this results in death threats and threats to someone’s family and nonstop threatening mail to reporters. This strategy of attacking the source behind the story prompted Trump to go after Laurene Powell Jobs. Goldberg put Trump on notice while on CNN…

“We’re not going to be intimidated by the President of the United States. We’re going to do our jobs.”

This morning David Frum a former speechwriter for President George W. Bush and staff writer of The Atlantic Editorial Board, made good on Goldberg’s promise by publishing an article titled…

“Everyone Knows It’s True: As Trump vehemently disputes reports that he has disparaged veterans, some silences speak loudly.”

There's more coming on the Trump attacks on soldiers