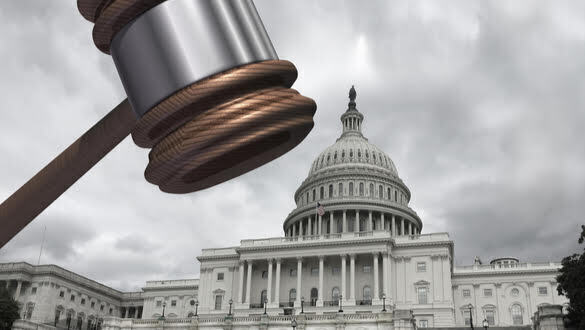 What appears to be a criminal attempt by the U.S. Secret Service to cover up former President Trump's attempts to interfere with the counting of electoral votes by Congress has triggered a criminal investigation by an inspector general assigned to oversee Homeland Security.

NBC News Pete Williams and Julia Ainsley have just reported that the inspector general's investigation into the Department of Homeland Security (which oversees the Secret Service) over the missing text messages from Jan. 5 and 6, 2021, has now become a criminal probe. The results of what unfolded could also be referred to federal prosecutors for indictment.

"The DHS Inspector General informed the Secret Service on Wednesday evening that the investigation is now criminal and that it should halt all internal investigations on the missing text messages," a letter relayed to reporters says.

"To ensure the integrity of our investigation, the USSS must not engage in any further investigative activities regarding the collection and preservation of the evidence referenced above,"

"This includes immediately refraining from interviewing potential witnesses, collecting devices, or taking any other action that would interfere with an ongoing criminal investigation."

According to NBC, the letter was sent to the Secret Services' Director James Murray, but Murray is about to leave the Secret Service to take a job at Snapchat, the social media site that, ironically, allows message senders to erase them after being viewed.

Furthermore, the Secret Service confirmed in a statement issued today that they received the letter and have informed the House Select Committee investigating the January 6 attack on Congress of the investigation, despite being asked months ago by the House January 6 Committee to preserve the texts and communications. Due to the failure to preserve the communications and the Secret Service's failure to disclose the deletions, only one text message was produced.

Earlier in the day, the Department of Homeland Security ordered Secret Service indicates that even the DHS doesn't trust the Secret Service to conduct an internal inquiry.