Millions at Risk in North Korea, do to Inadequate Medical Preparedness 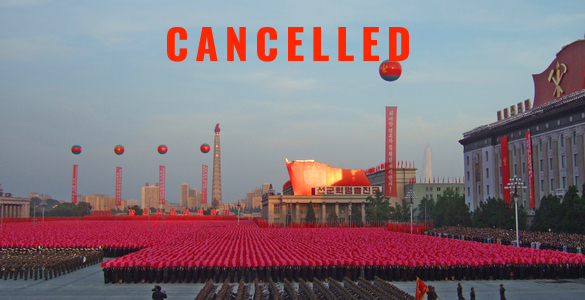 The North Korean government has virtually no resources for fighting off the deadly Coronavirus. So much so, that the Kim Jong Un regime canceled its most anticipated parade in central Pyongyang on Saturday, to celebrate the 72nd anniversary of the founding of the country’s armed forces.

The annual event since Kim Jong Un rose to power on his father’s death has feathered him presiding over the parade that displays the North’s latest missiles and other fearsome weaponry along with a hundred thousand plus goose-stepping soldiers or riding in tanks. This year there’s no parade, no bragging about its nuclear warheads or even an unveiling of the country’s “new strategic weapon” that Kim has vowed to unveil.

North Korea’s Rodong Sinmum, officially known as the ruling Workers’ Party newspaper, went low key with a claim that the country’s armed forces’ has a record of success combating “severe and dangerous difficulties.” The annual parade was canceled but no mention was offered for the reason why.

However, fatalities in North Korea are being reported by South Korea’s Seoul-based website Daily NK that claims five people had died in the critical northwestern city of Sinuiju,  which is the largest Chinese city in the region and a key point for commerce with North Korea despite sanctions. There have been absolutely no estimates of the total number of infections in Sinuiju, much less the entire country.

Daily NK, relies entirely on sources inside North Korea that send reports via Chinese mobile phone networks to the newspapers contacts in China. These sources report that NK authorities had…

“ordered public health officials in Sinuiju to quickly dispose of the bodies and keep the deaths secret from the public.”

According to Daily NK, those who have died from the Coronavirus crossed the porous Yalu River border despite orders to cut off traffic from China. Sources report that one of the first NK infected patients was hospitalized in Sinuiju…

“with symptoms similar to a cold and was given fever reducers and antibiotics.”

…but, the patient died as the fever rose.  The two more patients died two days later in another hospital in Sinuiju and two more in a nearby town.

North Korea could suffer a Coronavirus epidemic worse than that’s sweeping through China and globally because of its shortage of essential medicine and equipment. If the Coronavirus sweeps through the hermit kingdom unchecked, it could undermine its dictator’s Kim’s tight-fisted control over his country of 25 million people, most of whom live in poverty, suffer hunger and weakened immune systems.

Bruce Bennett, a long-time analyst at the Rand Corporation in an interview with Bloomberg…

“Because health conditions and health care in North Korea are so bad…they cannot allow the replication process to develop without severe intervention…they have to take drastic steps to keep the virus from spreading fast.

According to Daily NK’s the dictatorship to its north, just streamlined a headquarters to coordinate operations and reports marshaling 30,000 workers to combat the epidemic. That alone would prove that North Korea’s exposure to the potentially deadly virus is not contained to a small number indicted by the five reported deaths in Sinuiju.

Another indication the North Korean exposure to the coronavirus is a severe problem is a fact that foreigners working in Pyongyang, including those with diplomatic missions or non-governmental organizations, were banned temporarily from venturing outside for shopping.

Further, without mentioning the Coronavirus hospitals and clinics in Pyongyang that do have a supply of the needed supplies and other hospitals serving the elite in the capital and elsewhere are revealing desperation subtly through the state media.

South Korean news agency and the South Korean newspaper Rodong Sinmun warned on Saturday … “the fate” of North Korea was at stake. This echoes the warning of Bennett of the Rand Corporation concern who stressed in his interview...

“North Korea lacks a vaccine or medical abilities…so they have to act by preventing the disease from coming into North Korea.”

The point is they must…

“…rapidly contain any leakage—exactly what they are trying to do by preventing people-to-people contacts.”

Anyone with an understanding of North Korea knows that stopping all traffic between the two authoritarian countries is virtually impossible as long as people move illicitly across the border, carrying on low-level commerce in need to survive an old decrepit system.

JoongAng Ilbo, one of South Korea’s newspapers, cited an anonymous source saying that a woman had been diagnosed in the capital and that all those with whom she had had contact had been quarantined.

Still, North Korea officially has denied any cases of the Coronavirus while at the same time attempting to get people to cooperate in stopping the spread of the disease.

“civil awareness and unity in dealing with the disease while assuring his audience there had so far been no cases.”

Evans Revere, a former senior U.S. diplomat who specializes in North Korean issues, was quoted on Saturday as saying…

“I believe absolutely nothing of what I hear from Pyongyang.”

“It simply defies credibility that a country with a grossly inadequate public health infrastructure and a malnourished population, a country that depends on China for some 90 percent of its trade, and a country that had until recently opened itself up to a major influx of Chinese tourists to earn foreign exchange has avoided having many victims.”

“The total closure of the border and other measures Pyongyang has taken reflect a real sense of emergency in the North about the threat.”

Revere went on to say…

“I can't help but think it may also reflect panic if the number of patients is growing.”

Another pair of North Korean experts Victor Cha and Marie DuMond of the Center for Strategic and International Studies in Washington in an article in Beyond Parallel, published by CSIS, reported that…

“…the Coronavirus arguably poses a unique threat to North Korea.”

“The regime’s relative isolation from the international community hinders the widespread penetration of many diseases from abroad,” they wrote, but “the porous nature of the border with China and frequent travel is a clear vector for the virus’ transmission…If there are reports of the virus inside of North Korea, we should expect that the virus would spread rapidly, given the state’s inability to contain a pandemic.”

By Now, it May be too Late for North Korea to Stamp Out the Deadly Effects of the Coronavirus!

“Several suspected Coronavirus infections have occurred in North Korea even though it shut all its borders. The infections most likely spread through porous parts of the border with China that see plenty of smuggling and other clandestine traffic.”

Steve Tharp, who’s been analyzing North Korean affairs as both an army officer and civilian expert for many years in South Korea, said in Chosun Ilbo…

“Bottom line, the coronavirus has tightened up sanctions enforcement more than any other measure over the years because the North Koreans are actually self-enforcing the sanctions, against their will, through the tight closing of their borders in order to save the regime from being wiped out by this human pandemic coming.”

“North Korea’s leaders understand very well that this pandemic would rip through their population and be much more dangerous in North Korea than other places because of their inadequate medical infrastructure and the low resistance disease of the general population after so many years of surviving under near-starvation conditions.”