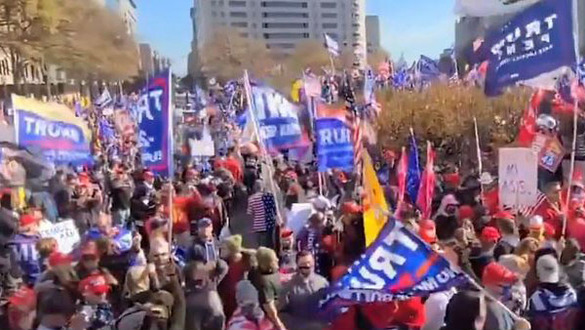 President Trump supporters boasted that 1 million MAGA protesters would take the streets this past Saturday to protest the right of over 78 million of their fellow Americans to vote for someone other than Donald Trump to be President.

A dismal 10%, a puny 50,000 MAGA protesters (AT MOST) of the promised 1 million showed up in Washington on Saturday.

Yet, Trump’s press secretary, Kayleigh McEnany, playing to her bosses’ delusional state of mind, sent a tweet out claiming…

“More than one MILLION marchers for the President” descend on the swamp in support. Best base in political history – we LOVE you guys!!!

McEnany lunacy proves having a Harvard degree is no guarantee of integrity.  Nowhere near had a million protesters— gathered in the nation’s capital over the weekend. This isn’t news to President Trump, who drove by the people gathered in his name on the way to his golf club in Virginia.

According to the Daily Beast, those approximately 50,000 (AT MOST)heard from an assortment of white supremacists, violent fascists, and conspiracy nuts. The 50,000 Trump zealots took to the streets of Washington DC to voice their political and speaking point master's condemnation of the election results. The crowd also got a glimpse of their head conspiracy theorist Donald J. Trump who did a drive-by to admire his fan base and to see firsthand how his single voice can disrupt a national election.