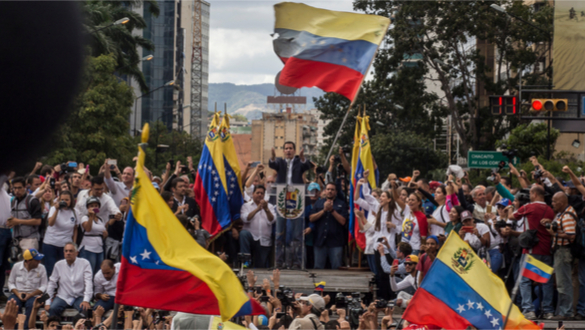 With that in mind we have a large naval force moving into the Persian Gulf, and forces on alert throughout the Middle East. At the same time, Washington appears ready to remove Venezuelan President Nicolas Maduro from office by force. Over the weekend Juan Guaido, Venezuela’s opposition leader appears to have decided to accept Washington’s military solution by instructing his Washington envoy to meet with Pentagon officials to “cooperate” on a military solution to the country’s political turmoil.

Make no mistake about it. When you abandon all hope for a political solution and seek to “cooperate” on a military solution for political turmoil, you’re rushing forward towards a war.

Juan Guaido, the 35-year-old leader of Venezuela’s legislature, declared himself the nation’s legitimate President in January, and has since, been attempting to oust embattled President Nicolas Maduro, with protests, demonstrations, military defections and with the threat of military action by the US if necessary. Guaido’s announcement at a political rally on Saturday…

“We have said from the beginning that we will use all the resources at our disposal to build pressure. We have instructed our ambassador Carlos Vecchio to meet immediately... with the Southern Command and its admiral to establish a direct relationship,”

The U.S. Southern Command had already Tweeted on Thursday that it was prepared to discuss how to support the future role of Venezuelan armed force leaders who “restore constitutional order” in the country…

“When invited by [Juan Guaido] & the legitimate government of Venezuela, we look forward to discussing how we can support the future role of those [Venezuelan naval] leaders who make the right decision,” the body said.

Meanwhile, Vladimir Padrino, Venezuela’s defense minister, said a US coast guard ship had entered the country’s territorial waters on Saturday, a move he said the Maduro administration would not accept.

A spokesperson for the Southern Command dismissed the news on Friday, saying the U.S. coast guard vessel would be conducting a “counterdrug detection and monitoring mission” in “international waters.”

Earlier last week Mr. Guaido told an Italian newspaper that he would “probably” accept a US military intervention in Venezuela.

But the Trump administration officials have repeatedly let it be known that “all options are on the table” to remove Mr. Maduro. Both Maduro and Guaido are accusing one another of trying to orchestrate a coup. 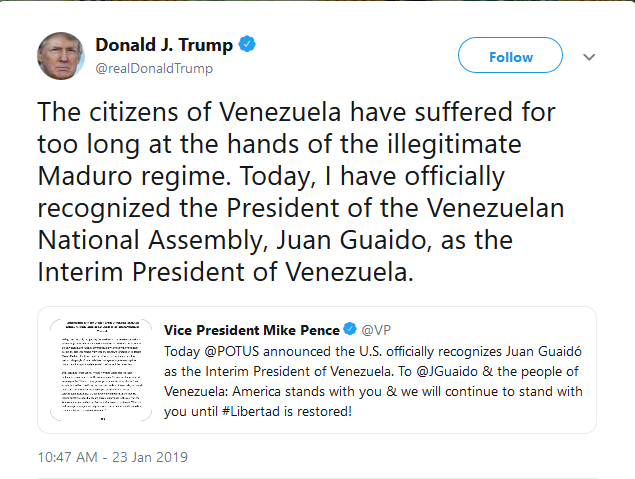 Mr. Guaido alleges that Maduro stole the election last year and attempted an unsuccessful military uprising against Mr. Maduro last week with the backing of the U.S. and 50 other nations.

He declared himself the country’s legitimate president in January, backed by the, but has been unable to remove Mr. Maduro or win the backing of Venezuela’s military leaders.

Nicolas Maduro reacted to failed military takeover by ordering the arrests of key supporters of Guaido including his deputy Edgar Zambrano, who remained locked in his car while being towed to prison and his first vice president.

“We live in a dictatorship! “We don’t have the option to stay at home waiting, but to keep demanding our rights in the streets.”