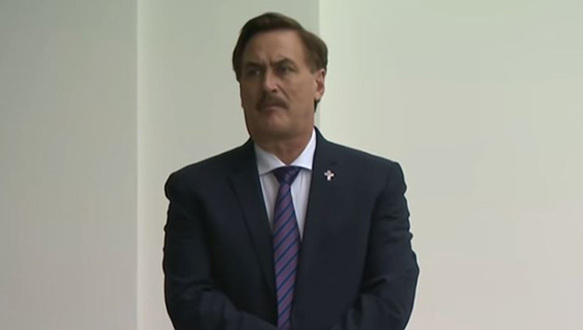 Mr. Pillow is on his way to bankruptcy due to the lawsuits filed against him by the two voting machine companies he falsely claims were used to rigging the 2020 election.

MyPillow CEO Mike Lindell continues after one embarrassing prediction after another failing to come true promised this week that at least a billion people would watch his upcoming "The Moment of Truth Summit" on election fraud.

During a Tuesday broadcast on his Frank Speech platform, which has never drawn an audience of any consequence, Lindell lashed out at Fox News, Newsmax, and Salem Media, two of the most conservative media outlets, for refusing to broadcast conspiracy theories about the 2020 presidential election.

"It's the murder of our country, everybody! This is it! There is no tomorrow!"

"I'm telling you right now. We have the most important event this country has ever seen, a turning point in history, an apex in history. Everything we've done for a year and a half!"

"Cumulate on two days in August."

"And it's going to be seen by a billion people!"

Promises that have in the past been a complete break with reality and nothing but an attempt to sell his crappy pillows have earned him an F rating by the Better Business Bureau.

There are two huge reasons Fox News, Salem Media, and other national and local conservative media companies are running from him. British based Smartmatic is already suing Lindell, and the U.S. found Dominion has filed billion-dollar lawsuits for defamation l for promoting his conspiracy theory that the 2020 election was rigged against Donald Trump. In some cases, he committed defamation while trying to hawk his swag.

FOX News and NewsMax are also being sued for their part in claiming and promoting the claims of others that the 2020 election as a result of these companies voting machines were somehow hacked, and as a result, the Presidential election was stolen.

Smartmatic's lawsuit against Lindell claims Lindell espoused lies about the company switching votes from Trump to Joe Biden to sell his products better.

The lawsuit by Smartmatic alleges in the lawsuit, filed to a federal court in Minnesota…

"Crazy like a fox. Mike Lindell knows exactly what he is doing, and it is dangerous," "Lindell intentionally stoked the fires of xenophobia and party-divide for the noble purpose of selling his pillows."

The company noted that the MyPillow brand was "a ubiquitous feature" and was "strategically placed" during his media appearances.

Another voting machine company, Dominion, filed its $1.3 billion lawsuit last February. In August, a federal judge gave the green light for the lawsuit against Lindell to move forward to a trial.

Since the two companies have filed the lawsuits, Lindell has made it very easy to prove their cases. Mr. Pillow has left many videos of himself defaming both companies while hawking his company's products.

The last summit Lindell pushed turned out to be a complete disaster, including his paid "technology and computer experts" admitting they could not prove his claims.