Michael Cohen Spilling His Guts Live On TV To Congress 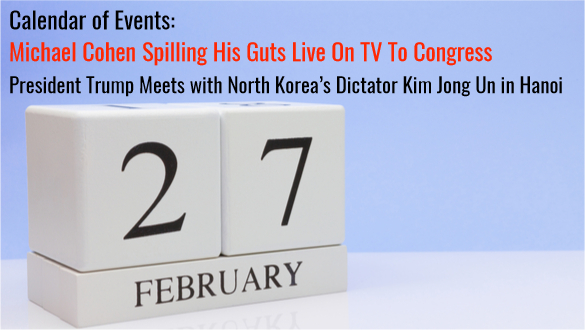 President Trump is on a full court press to win a Nobel Prize for peace; South Korea’s leadership knows it and is terrified that Trump will sell their security out when he meets with North Korea’s dictator Kim Jong Un in Vietnam’s capital Hanoi, on February 27. On the same day, Trump’s former lawyer and fixer Michael Cohen will be spilling long-kept secrets about the President, his businesses and family to Elijah Cummings and the House Oversight Committee.

Mark off February 27, 2019, on your calendar as the day Michael Cohen voluntary testifies and spills the beans on a wide range of topics regarding President Trump to the House Oversight Chair Rep. Elijah Cummings (D-MD) and his committee.  According to a memo released by Rep. Cummings, Cohen will be expected to discuss and testify on the following subjects…

·        the President’s potential and actual conflicts of interest

·        the accuracy of the President’s public statements

·        potentially fraudulent or inappropriate practices by the Trump Foundation

·        public efforts by the President and his attorney to intimidate Mr. Cohen or others not to testify

Michael Cohen canceled his last scheduled testimony committee out of fear for his and his family’s safety.  Cohen, however, will testify voluntarily, will not be under subpoena publicly on February 27 and then will also testify before the committee on February 28 to discuss matters that cannot be discussed publicly.

To facilitate the testimony, Michael Cohen has been able to push back the date he must report to prison by two months — from March 6 to May 6 to serve the three years in prison he was sentenced to last year.

For over a decade Cohen had been Donald J. Trump’s personal lawyer and fixer. Cohen is believed by many news and legal analysts to know most if not all of Trump’s darkest secrets. As a result, his testimony has the potential to be very damaging to the president, his businesses and his three oldest children who are intricately involved in the family businesses.

Cohen has been a loyal member of the Trump entourage now considers himself a whistleblower who is boldly telling the truth and is speaking out against the president’s corruption. Cohen has nothing to lose at this point he has already pleaded guilty to committing campaign finance crimes at Trump’s direction, implicating the president as an un-indicted co-conspirator. Cohen has also pleaded guilty to perjuring himself in front of Congress regarding his work on the president’s behalf to negotiate a deal with the Russian government to build a Trump Tower Moscow during the campaign.

The Wall Street Journal is reporting that Cohen will not discuss Special Counsel Robert Mueller’s Russia investigation but has been quoted in the past as saying Trump has not been honest about the Russia issue, and Mueller said he had provided details central to the investigation.