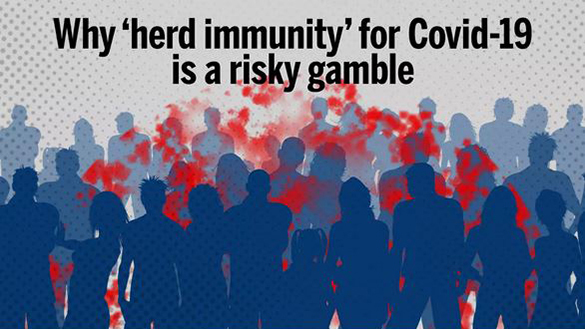 Another 890,000 Jobs lost last week. At this job loss rate, we are very likely to see 40 million Americans will be unemployed or dramatically underemployed by January 20, 2020, Inauguration Day.  The death toll from Covid-19 by then at the current rate will have climbed to over 320,000, and those infected in the United States will reach 12 million.

Could the economic and health crisis underway since March become even worse? The answer is not just yes but the economic impact and the number of those who die and are permanently saddled with a lifetime of pre-existing conditions from the coronavirus thanks to President Trump’s insanity.

The President has adopted the herd immunity strategy pushed by his new medical advisor Dr. Scott Atlas, whose views on Covid-19 and school re-openings more closely match his. After seeing him several times on Fox News, Trump enlisted Dr. Atlas, where he gets most of the people he hires for his administration.

Dr. Atlas is not qualified to give any advice other than people should wear a mask to protect himself; the advice he refuses to give. Atlas is a senior fellow at Stanford University’s Hoover Institution, a conservative think tank; Atlas is not an infectious disease expert;  he’s board-certified in diagnostic radiology, which means he specializes in reading and interpreting imaging like X-rays, CT scans and MRIs. He served as a professor and chief of neuroradiology at Stanford University Medical Center from 1998 to 2012.

Dr. Atla’s push to adopt a herd immunity strategy has virtually no legitimate support from medical experts in immunology or viral disease. His herd immunity strategy would allow all 330 million people living in the United States to become infected. It could kill hundreds of thousands, if not millions of Americans in the next 12-24 months.

Federal Reserve Chairman Jerome Powell’s begging for Congress to pass another stimulus package and a large infrastructure bill may seem to many as desperate and frantic. To those who believe his calls to be desperate and frantic, they are right. Powell understands the danger zone the U.S. economy is in. Powell gets it and knows the U.S. stock market’s major indices have been inflated into a giant bubble that will pop if Mitch McConnell and Market Meadows don’t pull their heads out of the asses quickly. Mitch McConnell’s offer of $500 billion amount to his tells American’s in distress to no fault of their own amounts to him telling them to drop dead.