Masked Students Are Unable to Learn or Smile 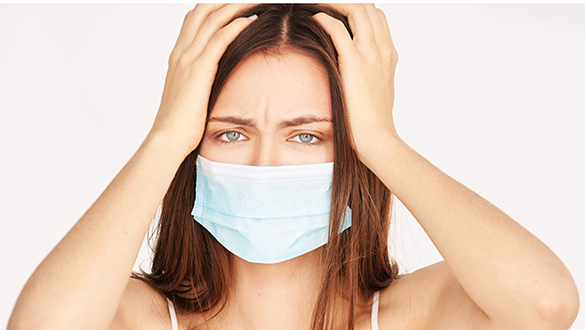 GOP states are facing pushback against mask mandates for students as the states are getting hit hard by a new Delta coronavirus surge. Unilateral GOP's decision to impose a no-mask mandate will put lives at risk.

Florida Governor Ron DeSantis (R-FL) issued an executive order to "protect parents' freedom of choice" over whether their children wear masks at school.

"The federal government has no authority to tell parents that their children must wear a mask all day, every day, to attend school in person," DeSantis said in a statement.

DeSantis said: “I want to see our children smile.” Florida is currently seeing a surge in coronavirus infections.

Just two days ago, local officials in Broward County, one of the biggest school systems in Florida and the country, overwhelmingly decided to make masks obligatory for all children and adults in the district across the board.

On Sunday, South Carolina Gov. Henry McMaster, a Republican, stated that kids who wear masks are unable to absorb their lessons.

At a news conference on Tuesday, the Republican was questioned about why he signed the ban, to which he said, "Our cases were at their lowest point."

Now, everything has changed. In retrospect, I wish it had not passed into law, but we have no choice but to modify it or wait for the courts to rule that it was founded on unconstitutional grounds.

To enable local school districts to adopt their own regulations to safeguard younger children who are not yet eligible for the vaccination, the governor has summoned the state Legislature back for an emergency session to alter the legislation to allow them to do so.

In a news conference, Hutchinson said that local school districts should decide and have more choices to ensure that their school is a safe place when education is facing a number of challenges.

Hutchinson went on to say that he was well aware that the legislature would have overruled him if he had refused to sign it, casting doubt on the legislature's willingness to make the modifications Hutchinson had asked.

Hutchinson let the state's mask requirement expire at the end of March this year.

According to the newspaper, according to data compiled by the New York Times, Arkansas has experienced a 69 percent rise in cases and a 52 percent increase in hospitalizations during the past 14 days.

According to data from the state's health department, 260 people treated for the virus were placed on ventilators. The highest number since an all-time high of 268 individuals was reached in early January.

Even though just 37 percent of Arkansas citizens have been completely vaccinated, which is one of the lowest vaccination rates in the country, Hutchinson indicated on Tuesday that demand is rising.

"I believe you are also witnessing an increase in the number of individuals attempting to get correct information."

At a press conference on Tuesday, Dr. Jose Romero, Arkansas's health secretary, the number of cases had increased dramatically among young people, noting that 19 percent of the current cases were among those under the age of 18 and describing the findings. As "sobering news."

Romero went on to say that although children were not required to wear masks, he "obviously" advised that they did so when kids returned to school.

Two Arkansan parents have filed a lawsuit against the state to convince a court to temporarily suspend the regulation enabling schools to mandate masks for their children.

A number of other states have enacted laws or issued executive orders prohibiting the wearing of masks in schools.

On Tuesday, the White House slammed DeSantis and Texas Gov. Greg Abbott, claiming that the two states had supplied a disproportionate number of new COVID-19 cases to the system.

However, despite the increase in cases, Hutchinson has also asked the legislature to uphold the state's decision to withdraw from federal unemployment and pandemic relief programs, stating that "it is more important that we reduce the number of unemployed and put more people to work than it is for the state to accept any federal relief programs related to unemployment."

Many states started to reduce the extended benefits in June. Still, there is no indication that the absence of assistance for the unemployed has affected the nation's unemployment rate.

CDC Recommends All Students Wear Masks When They Return To School