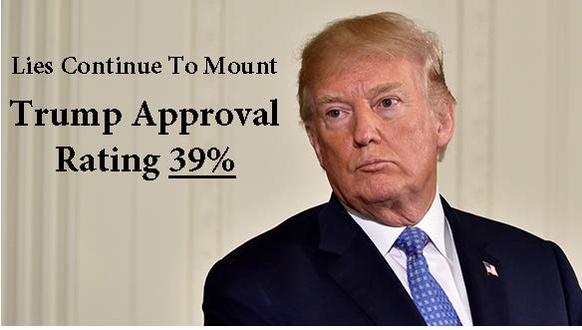 Are President Trumps lies catching up with him?  His job approval rating may be an indication of real trouble. The latest Marist Poll, worldwide by journalists and academic as one of the most accurate rated number one for accuracy by Bloomberg Politics, and along with its battleground state polling partners — NBC News and The Wall Street Journal — The Marist Poll also received an “A” rating from Nate Silver’s FiveThirtyEight is showing the potential for a real disaster for the President as he starts campaigning for the mid-term election.

The president’s approval rating after rallying over 40% recently is now back to 39%. Meanwhile, 51% disapprove of how Trump is doing his job. At a similar point in President Barack Obama’s first term (October 2009), President Obama’s approval rating among registered voters was 53%.

WallStreetRebel.com: The low water mark so far for the President per the Marist Poll is an approval rating measured early in the year of 35%.

If the President’s approval level falls that low and Democratic intensity continues to rise. The GOP could lose a net of 4 senate seats and 61 seats in Congress. This would be a nightmare for President Trump. With subpoena power and the potential for a string of damaging revelations that might unfold during a new wave of Congressional hearings – we could see enough GOP Senators abandon him that the needed 67 votes in the Senate needed to convict Trump and remove him from office materialize.