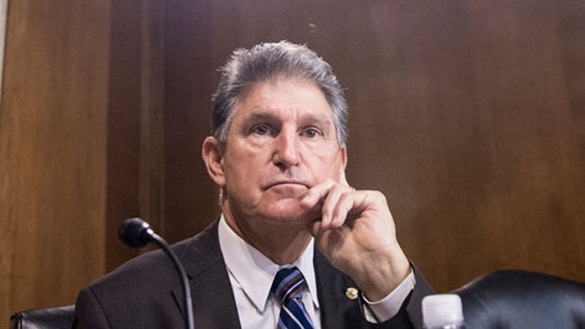 West Virginia Senator Joe Manchin, a coal mine constituency state, opposed the clean energy program. Manchin's support for the measure will be essential if it passes.

The reluctance of Sen. Joe Manchin (D-WV) to back the cornerstone of President Biden's climate plan puts the Democrats' whole infrastructure and social spending agenda in jeopardy, according to the Democratic National Committee.

To pass Biden's plan, Senate Majority Leader Charles Schumer (D-NY) devised a two-track strategy based on the expectation that Manchin would concede ground to progressives in exchange for their support of the complex infrastructure bill he and Sen. Kyrsten Sinema (D-AZ) negotiated with Republicans.

The Senate has approved Manchin's infrastructure plan, which includes billions of dollars in additional money for West Virginia's needs — such as the Appalachian Development Highway System — but he has not signed on to the climate commitments that progressive Democrats have pushed for years.

With his adamant opposition to a $150 billion clean power plan that was meant to serve as the backbone of Biden's transition to clean energy, he threatens to undermine what was supposed to be a great deal between moderate and progressive Democrats.

Democratic leaders in the Senate are unlikely to approve the $2 trillion to $3 trillion social spending plan via reconciliation if Manchin is not present.

However, by eliminating the climate elements of the plan, Democrats run the danger of losing progressive support in the Senate for the reconciliation bill and the House for the $1 trillion bipartisan infrastructure bill.

They are well aware that the longer discussions continue, the more probable that differences will get entrenched.

Adding that his colleagues are "anxious," Durbin cautioned that the longer they delay, the less likely it is that they will be able to create a product that the American people are eager to receive.

Durbin expressed disappointment that Manchin seems to have removed one of the most important climate-change measures from the package.

His Position on clean power is clear: "I favor the clean electricity strategy, and I'm sad that Sen. Manchin opposes it."

In a statement released Monday, Durbin recognized that the failure to enact legislation to substantially reduce global warming gas emissions would be seen as a huge failure.

On Monday, the Democratic senator from West Virginia responded to accusations from his own party that he is impeding President Joe Biden's plan by refusing to reciprocate progressives' support for his bipartisan infrastructure plan earlier this summer.

He claimed that he and Sinema aren't the only ones standing in the way of Biden's most ambitious plans, pointing out that Republicans are united in their opposition to them.

Moreover, 52 senators disagree, and two senators want to work out a solution as soon as possible most logically and reasonably," he said.

Manchin also expressed skepticism about meeting a deadline of Oct. 31 for reaching a settlement, telling reporters, "I don't see how that would happen."

Progressives headed by Sens. Sheldon Whitehouse (D-RI), Ed Markey (D-MA), and Jeff Merkley (D-OR) have been warning for months that they would not back a large budget reconciliation package if it does not contain significant measures to reduce carbon emissions from the transportation sector.

Either we'll have an agreement that's good enough on climate change, or we won't have a deal at all, Whitehouse predicted earlier in the month.

Sen. Tina Smith (D-MN) has now said that she would not support the reconciliation package unless it contains significant environmental change.

"Climate change must be addressed seriously in the Build Back Better budget."

I'm open to trying various methods, but I can't support a law that won't bring us to where we need to be in terms of carbon reductions in a short time.

There are 50 Democratic senators in the United States Senate.

"It will take all of us to get this approved," she said on Twitter.

Progressives made it clear during the debate on the bipartisan infrastructure package that they expected major climate provisions to be passed later in the year, according to a Democratic senator on Monday evening. The senator said that Manchin's staunch opposition to the clean electricity program is jeopardizing the entire dual-track strategy.

Because of Manchin's desire for a strategic pause, it isn't proving easy to have all of the important people in the same room at the same time to work things out.

"It's a significant issue."

As of Monday, Whitehouse said that if the clean energy program is not included in the bill, it would have to be replaced with other changes that will have the same or greater effect.

"It necessitates a reevaluation of how we will achieve our emissions reduction targets, and it underscores the need for measures such as the methane pollution charge and the carbon pollution fee," he added.

It only takes a single Democratic vote in a 50-50 Senate to derail President Biden's human infrastructure investment plan. Manchin wants to reduce to $1.5 trillion from the $3.5 trillion goal established in the Senate's fiscal year 2019 budget resolution.

Representative Pramila Jayapal (D-WA) and other progressive members of the House have said they would not vote for the $1 trillion bipartisan infrastructure plan approved by the Senate in August until a compromise is reached on the budget reconciliation package.

In the last week of September, Democratic centrists in the House attempted to force a vote on a bipartisan spending bill. Still, Speaker Nancy Pelosi (D-CA) was forced to withdraw it from the floor after progressives stood firm and threatened to defeat it. At the same time, the larger reconciliation spending package remained in limbo, according to Politico.

In an interview with the West Virginia Working Families Party's Ryan Frankenberry, the state director said that "we are approaching a pressure point between the House and Senate Democrats."

While he believes "something will come to pass," he also acknowledges that the great deal between Democratic centrists and radicals may come crashing down.

To put additional pressure on Manchin to endorse President Joe Biden's "Build Back Better" program, Frankenberry's organization is a member of a coalition that has launched a six-figure television ad campaign.

The advertisement emphasizes that the reconciliation measure has the potential to generate 30,000 new jobs in West Virginia.

Officials at the White House have begun looking for alternatives to fossil fuels to wean energy utilities off of them. However, environmental experts are skeptical that they will get Manchin's backing for any changes that will decrease market demand for coal and natural gas.

An advocate for a prominent environmental lobbying organization said that the reconciliation package would contain a range of tax incentives for renewable energy sources that will substantially affect emissions, describing them as "truly a huge issue" in the context of climate change.

But the source recognized that the clean power program "is essential" since it would provide financial incentives to some of the most polluting energy providers for them to embrace more environmentally friendly technology.

Companies that are currently transitioning away from fossil fuels are considered more likely to take advantage of clean-energy tax breaks than utilities that have made little effort to alter their operations in the past.

Senator Biden may include more money for social spending programs in the reconciliation plan, according to a Democratic staffer in the Senate, to make up for the loss of one of his key climate ideas and keep liberals pleased.