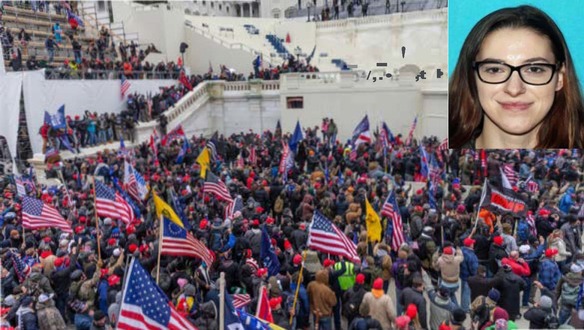 Speaker of the House Nancy Pelosi’s defiant statement about President Trump that all roads lead to Russia is especially ironic now coming with only two days before the Biden Inauguration.  Federal authorities charged a Trump supporter for stealing Pelosi’s laptop, and she is suspected of planning to sell it to Russia’s foreign intelligence services.

In an affidavit filed late Sunday evening, agent’s of the FBI asserted that they received a tip from a former romantic partner of Riley June Williams, 22, who recognized her in footage shot during the insurrectionist attack caught by British television network ITV. Williams’ former lover reported to federal authorities that having seen other video of the event, saw Williams pocketing the computer from Pelosi’s Capitol building office conference room.

William’s former romantic partner apparently told investigators that Williams had said she intended to send it to a friend in Russia who would arrange the transfer to the SVR, the Russian equivalent of the CIA.

According to the affidavit submitted to obtain a warrant for her arrest, Williams former partner told FBI agents that the plan to sell it to Russia’s SVR has fallen through, and the laptop remains in her possession. William is apparently aware of the all-points bulletin and warrant for her arrest, so by the time investigators tracked William’s down to the apartment she shares with her mother in Harrisburg, Pennsylvania, she had already fled, according to the court affidavit.

Williams’ mother told FBI agents investigating her that the day before their showing up at the apartment, a United Kingdom ITV news crew showed up at her door looking for her daughter.

In a segment that aired on that network Sunday, William’s mother confirmed for those reporters that her daughter was the woman seen in earlier footage of the Capitol attack, directing other insurrectionists inside the Capitol rotunda toward a staircase lading to Pelosi’s office.

Riley June Williams was dressed on January 6, 2021, in a green T-shirt, glasses and a brown coat with a zebra print bag slung over her shoulder. Agents identified Williams shouting, “Up the stairs! Go!” repeatedly as she pushes rioters onward.

According to the ITV interview, as people began to recognize her in the insurrection videos at our nation’s Capitol, she fled without saying where she was going. Her mother said….

She took off not only because of that [video].”

“She figures if it’s out there, they’ll [the FBI] come to her about it.”

Williams’ mother tried to defend her daughter as a very “empathetic and loving person” who had taken a sudden interest in President Donald Trump’s politics and far-right message boards in recent months.

Her mother also insisted, Williams rarely talked about her politics….

“It’s all about wanting America to get the correct information,” she said.

According to the FBI affidavit filed in court, Williams drove to Washington on January 6 with her father, a Camp Hill resident, to attend the “Stop the Steal” rally but split up during the day. They reunited after police had cleared the Capitol that evening and drove back to Harrisburg the same day.

Williams’ alleged role in the theft of Pelosi’s laptop remains under investigation. At the moment, she is charged only with unlawfully entering Capitol grounds and disorderly conduct. The problem for Williams is Pelosi’s chief of staff, Drew Hammill, confirmed on Twitter in the days after the attack that a laptop, primarily used for presentations, had been stolen from a conference room in the House speaker’s office.

According to the latest count, FBI agents and law enforcement have charged more than 152 accused rioters in the nearly two weeks since the Capitol attack, including three other Pennsylvania residents.

The third man, Robert Sanford, a retired Chester firefighter, is accused of throwing a fire extinguisher that injured three Capitol Police officers during a melee on the building’s steps and led to one police officer’s death.

If the allegation that Riley June Williams attempted in any way to sell or transfer Pelosi’s laptop to Russian Intelligence, she could face trial for treason and a death sentence. Williams is not accused of theft at this moment. She is only charged with violent entry or disorderly conduct and entering the Capitol’s restricted space, the same charges faced by many who took part in the siege that day.

Suppose Robert Sanford is convicted in the Capitol police officer’s death due to his throwing the fire extinguisher. In that case, he could face manslaughter, 2nd degree murder charges, and a myriad of other charges that would effectively put him in jail for the balance of his life.