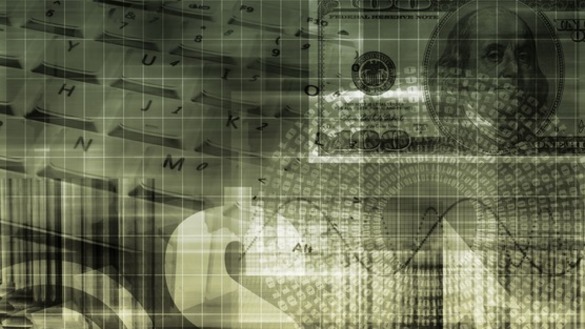 I recent alerted a few of my long time followers to  my conviction that the long-term secular trend toward ever looser credit is destined to terminate in Hyper-Deflation. Market news in the last few days has drawn a red line under my prediction of higher bond prices and thus lower yields on US Treasury securities. The day before yesterday we saw the biggest rally in Treasuries in two years. Only a fraction of those gains was given up in yesterday's trade.

This re-enforces the deflationary dynamic. Higher prices for US bonds in contrast to collapsing bond prices in the Southern tier of the Eurozone attract flight capital, raising the exchange value of the US dollar. A higher dollar jeopardizes the prospect that trillions in US dollar-denominated debt can be repaid by foreign borrowers (especially in emerging markets). And the strong dollar also augurs for lower commodity prices, thus undermining the collateral supporting the debt.

Sharp currency moves are fundamentally de-stabilizing, particularly a dollar rally now as currency traders have carried record levels of shorts, expecting the US dollar to fall -- as it did for most of the early months of Trump's term.

Note also that Trump's trade policy aggravates the deflationary consequences of a higher dollar. By trying to force down the US trade deficit by applying tariffs and other interventions, Trump proposes to make fewer dollars available for a world that is defacto short trillions of dollars.

The understatement of the moment is the whole edifice of debt accumulated in the Debt Super Cycle since World War II, is in jeopardy of collapse. This has political echoes heard around the world, including the apprehension of the collapse of the Eurozone due to the political crisis in Italy -- where income has grown not at all in this century. The linkage was shrewdly summarized in the September 1992 issue of The Elliott Wave Theorist:

"Major bear markets are accompanied by a reduction in the size of people’s unit of allegiance, the group that they consider to be like themselves. At the peak, there is a perceived brotherhood of men and nations. … In other words, at a peak, it’s all ‘we’; everyone is a potential friend. At a bottom it’s all ‘they’; everyone is a potential enemy. When times are good, tolerance is greater and boundaries weaker. When times are bad, intolerance for differences grows, and people build walls and fences to shut out those perceived to be different."

Sound familiar? "People build walls and fences to shut out those perceived to be different."

It almost goes without saying that the bond rally and commodity slump suggest a slowdown in the economy. And the fact that currency traders are massively short of dollars and bullish sentiment in Treasuries is strikingly low at 5%, mean that there is a potential for violent moves to the upside, in both Treasuries and the dollar.