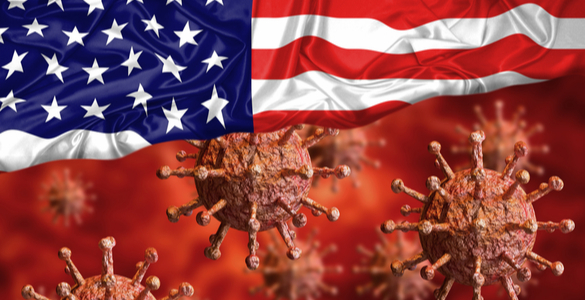 National Securities chief market strategist Art Hogan and TV stock prognosticator Jim Cramer are both predicting as much as a 5% correction in the U.S. stock market. They may be too conservative in their downside predictions.

CNBC’s Jim Cramer said Monday morning that investors, who were waiting for the market to pull back so they could buy stocks at cheaper prices, should stay on the sidelines a little longer referring to concerns about China’s Coronavirus coming to a full rolling boil before the panic subsides …

“This is the panic people have been waiting for,” Cramer said on “Squawk on the Street.”

“We’ve been saying over and over if we get an exogenous event that’s when you get the selloff, that’s when you have to buy…I think it’s only timing when to buy… Give it a little break.”

Cramer went on to say…

“My guess is if we’re going to rationalize a market that’s pretty stretched right here, it’s going to happen right now,” he said in a CNBC interview.

“We have about a third of the S&P 500 reporting. We’re going to see the losers lose a whole lot more than we’ve seen in a while. The index itself could probably pull back 3% to 5%.”

Meanwhile, Art Hogan National Securities chief market strategist appears to be on the same page predicting the S&P 500 could see a pullback of as much as 5%. He, however, isn’t blaming the pull back on either spread of the Coronavirus or rising tensions with Iran…

“Stocks are relatively priced for perfection, and you tend to have a bit of an overreaction to bad news or in-line news when that happens…

With a crowded slate of earnings on tap, Hogan warned that it would probably be the biggest winners getting the biggest haircuts.  There are five technology names that are driving a good chunk of the movement in the S&P. On the other side,  you see the utilities index.”

“The (S&P) index is trading at 25 times and it’s throwing out a dividend that’s less than 3%. Both of those numbers are historically stretched. This is an index that usually trades at 16 times and has about a 5% dividend.”

Neither Jim Cramer nor Art Hogan is not bearish on the future, Hogan like Cramer are both insisting this estimated 5% pullback on the S&P will be a big opportunity for investors.

China has increased its quarantine from 40 million to nearly 60 million people in partial or full lockdowns in Chinese cities as the country's government steps up its response.

The Global spread now stands at 50 confirmed cases in 13 locations outside of mainland China, including at least five here in the United States.

Models constructed by a University Lancaster team of scientists predict a dire start to February: further outbreaks in other Chinese cities, more infections exported abroad, and an explosion of cases in Wuhan…

Brandon Brown, an epidemiologist at the University of California at Riverside who was not involved in the study when asked by an investigative reporter on Friday about the paper, responded…

Meanwhile, another study, published Friday by a team of Chinese scientific researchers in The Lancet looked at clinical data from the initial 41 patients admitted to hospitals in Wuhan; the scientists reported that 2019-nCoV, the technical name of the Coronavirus causes a range of symptoms, including pneumonia, fever, and cough, and can strike even healthy people, not just older individuals with underlying health issues.

These Chinese researchers believe the virus’s incubation period to be between three and six days. Thanks to the fact that the Coronavirus is undetectable - people can become unknowing carriers of the virus.

The studies both suggest large numbers of people could be walking around for days with no symptoms, spreading the virus to anyone they come in close contact with.  The Lancaster group’s prediction that we are going to see potentially explosive numbers of infections seem plausible to Brandon Brown….

“Right now, there is plenty of uncertainty on what will happen, but models may be our best method to predict how the epidemic will progress in the near future.”

Chinese university and college students started returning from China after the winter break last week to schools in the United States and around the globe. Wuhan is a city the size of London, with approximately 11 million residents. The Coronavirus could either peter out or become a much bigger crisis. If it gets worse, we could see the S&P, other U.S. stock indexes and global equity markets fall 10% in the next few weeks.

We at Wall Street Rebel are not so sure that the selloff ends at 5%, and believe we could see the Coronavirus become a health problem for millions of Chinese and people around the world. The infection is transmittable even when a person contaminated shows no symptoms. The current official count of those infected being reported by the Chinese government is 2,700 cases in mainland China and 82 deaths.  Wall Street Rebel and our sister publication World Opportunity Investor ($72 a year) believe the selloff started by the Coronavirus could send the S&P and other major indices down at least 10%.

Our sister publication Gold and Energy Options Trader just grabbed 80.7% profit on a put position on the S&P Index. We plan to re-enter another short position in the next 24-72 hours with Put Options. Keep in mind there are reports that this Coronavirus will infect as many as 190K people in China by the end of next week, that’s almost 70 times the infection rate in China.