Lindell Adds Obstruction of Justice to His Legal Troubles? 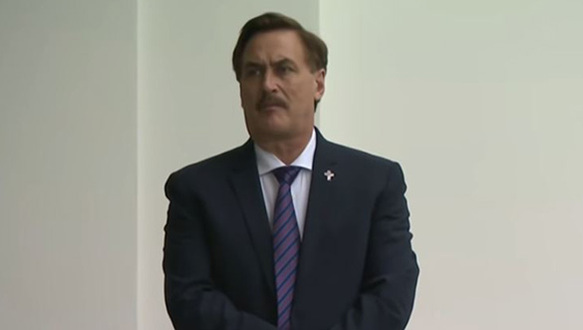 Mike Lindell, the My Pillow guy, faces a $1.7 billion Dominion Voting Machine lawsuit… A coding specialist claims he showed Lindell's cyber symposium proof was useless and may sue him for $5 million… Now he may be charged with obstruction of justice and conspiracy for concealing a person wanted by the FBI to question multiple felonies.

According to a new Vice News, Mr. Pillow founder and CEO Mike Lindell allegedly hide a Colorado election official in a "safe house" to protect her from an FBI investigation.

Lindell is being accused of hiding Mesa County Arizona clerk Tina Peters, who's been charged with facilitating the leak of highly sensitive election information in violation of state and federal law. Lindell, it is rumored, has Peters "holed up" in the safe house; he has provided her. According to the Vice News report, Lindell initially took her with him to Texas following his "cyber symposium" where she appeared in South Dakota last week.

"A disgruntled member of Lindell's own security team leaked Peters' location earlier this week, and so she was moved to another, unknown, location."

Lindell told Vice News on Wednesday, reportedly referring not to the FBI but to Dominion Voting Systems, which is suing him, and the Colorado secretary of state, who is also investigating Peters.

"She's worried about her safety; these people (FBI) are ruthless."

That accusation attributed to Dominion Voting Systems is likely to worsen his legal woes with that company. It implies that Peters has reason to believe that her safety and life are in danger.

Meanwhile, the FBI announced its investigation Tuesday into Tina Peters after passwords for Mesa County's election equipment were recently posted on the social media site Telegram and right-wing blog The Gateway Pundit.

Vice News could not reach the FBI for comment about whether Lindell could face prosecution for shielding Peters from the investigation. However, legal observers familiar with the situation warn that he could be charged with conspiracy and obstruction of justice charges.

Peters reportedly has been advised not to comment — but Lindell insists he wasn't the one to advise her to remain silent. However, his description of what has taken place could lead to his being charged criminally; he admits…

"I wanted her to go out there right away and say it, but she is getting advice from other people too."

If he admits to hiding her from the FBI, Mr. Pillow could become an inmate at a federal prison.