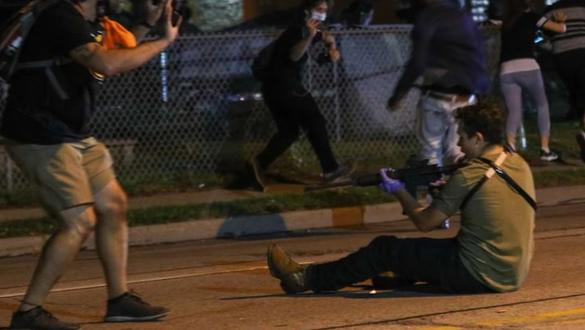 Kyle Rittenhouse was the initial aggressor.  But even people who knowingly put themselves in the wrong place at the wrong time are allowed to defend themselves against attack when they get there. Under the initial aggressor doctrine, he will not be allowed by a court to use a self-defense defense unless he can prove he was abandoning the fight, and the people trying to disarm him that he shot were using excessive force.  The video doesn’t support either claim.

Dave Aronberg, Palm Beach County, Florida, state attorney appearing on MSNBC’s “Morning Joe,” says Kyle Rittenhouse’s attorney’s claims that he acted in self-defense are contradicted by the video evidence and undermined by the law. Aronberg went on to point out…

“His lawyers are setting up for a self-defense claim.”

“So he was the initial aggressor, and under the initial aggressor doctrine, he’s not allowed self-defense unless he makes it clear he’s abandoning the fight or others come at him using excessive force, and according to videos doesn’t look like either of those claims hold water.”

“Because the first person that he (Rittenhouse) shot didn’t have a weapon, the second person he shot and killed came at him with a skateboard. The lawyers will say a guy wielding a skateboard could be dangerous. You tell that to a jury that Rittenhouse, who had an AR-15, was in reasonable fear of his life from a guy with a skateboard.”

“I think the first-degree murder charges here may need to be dropped down to second-degree murder or manslaughter because I don’t know if the elements are there,”

“But he could face 60 years in prison instead of life, so it’s still virtually life. Another thing we need to be concerned about, what kind of message does this send to young people when you hold this guy up to be a hero.

“There are hundreds of thousands of dollars being raised for his defense fund. Well, that encourages other vigilantes to go into conflict zones and possibly take other lives, knowing they too could be a hero on the far right. That puts everyone at risk.”

There’s one additional issue hampering Kyle Rittenhouse’s defense. After he had already killed two and injured a third person trying to stop him from shooting protesters with his AR15, Rittenhouse can be seen standing and firing his weapon into the crowd of protesters approximately a city block away. That’s not self-defense.

But what if Rittenhouse provoked the confrontation to begin with? That’s bad for a claim of self-defense, but it doesn’t preclude one. Here’s another excerpt from the Wisconsin statute books:

(a) A person who engages in unlawful conduct of a type likely to provoke others to attack him or her and thereby does provoke an attack is not entitled to claim the privilege of self-defense against such attack, except when the attack which ensues is of a type causing the person engaging in the unlawful conduct to reasonably believe that he or she is in imminent danger of death or great bodily harm. In such a case, the person engaging in the unlawful conduct is privileged to act in self-defense, but the person is not privileged to resort to the use of force intended or likely to cause death to the person’s assailant unless the person reasonably believes he or she has exhausted every other reasonable means to escape from or otherwise avoid death or great bodily harm at the hands of his or her assailant.

(b) The privilege lost by provocation may be regained if the actor in good faith withdraws from the fight and gives adequate notice thereof to his or her assailant.

(c) A person who provokes an attack, whether by lawful or unlawful conduct, with intent to use such an attack as an excuse to cause death or great bodily harm to his or her assailant is not entitled to claim the privilege of self-defense.

At this point, we don’t even know the names of the two people Rittenhouse murdered or of the person who was wounded by his gunfire.