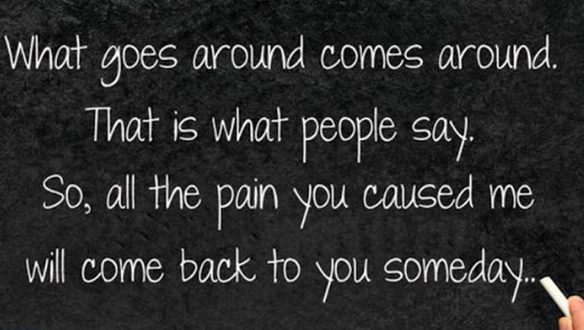 Comedian Kathy Griffin had been bullied by a MAGA supporter for months, so when she saw her harasser on video at the Capitol as one of the insurrectionists, it was her turn to call the FBI and point a finger.

I mean, if a person acts irresponsibly in his own life, he (she) will pay the consequences. And it's not so much divine retribution as it's built into the law of nature.  - Pat Robertson

There’s nothing sweeter than retribution and getting even with a bully at the same time.  Comedian Kathy Griffin wound up creating a media storm and had the Secret Service and FBI investigate her after she posed with a bloody replica of President Trump’s head a couple of years ago. She has been a target of MAGA trolls, including Danielle McCarty, a.k.a. “Muscle Mommy Fit” and “Fit Patriot Mom” recently.

According to LGBTQ Nation, Danielle McCarty was among the first to wage an online trolling war against Kathy Griffin for her January 9 tweet in which she wrote about President Trump…

McCarty, who went on the attack against the Trump foe, tagged Griffin in an insult-tweet. It prompted Griffin to click on the woman she discovered was part of the thousands of Trump supporters who attacked the Capitol.

“The despicable Kathy Griffin is at it again.” 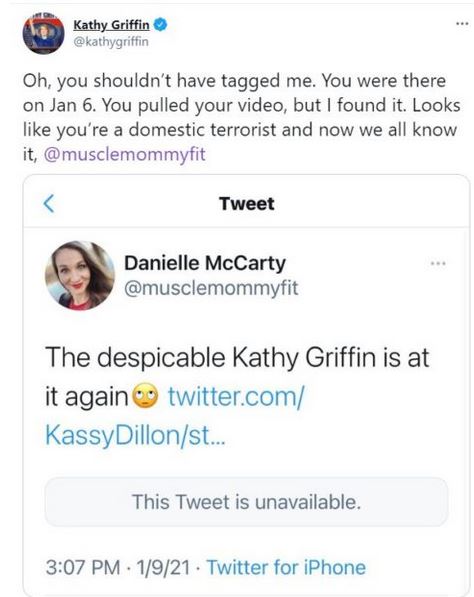 Besides reporting and identifying McCarty to the FBI, Griffin tweeted with a screen capture of McCarty’s tweet.

“Oh, you shouldn’t have tagged me.” “You were there on January 6. You pulled your video, but I found it. Looks like you’re a domestic terrorist, and now we all know it, @musclemommyfit.”

McCarty had since deleted her Twitter account @musclemommyfit, but not before the incriminating evidence was gathered and turned over to the FBI by Griffin and LGBTQ Nation.

After deleting her Twitter posts, McCarty was spotted in the archived videos posted to the Parler Frees Speech Social Network while outside the Capitol, whining that she was teargassed.

“We got teargassed when we were in the middle of a prayer.” “We weren’t even trying to rush the cops!”