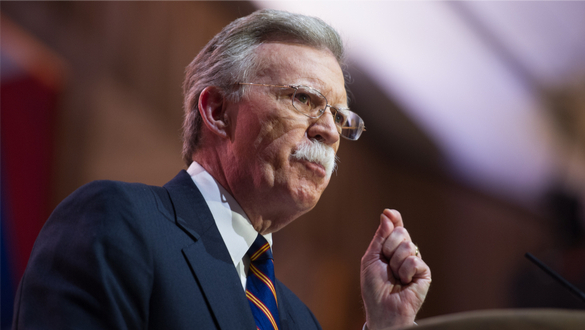 Former national security advisor and long-time GOP hawk John Bolton has long been one of the most disliked Republican targets of Democrats. He’s been labeled a neo-con and perhaps blamed in part for the U.S. invasion of Iraq, for killing the Iranian Nuclear Treaty and willing to plunge the U.S. in another middle-east war.

Liberals, progressives, and genuine libertarians, however, may no longer define him without a tip of the hat to his patriotism. Bolton is either already promoting his next book on his stint in the Trump Administration working directly with the President, or he’s about to spill the beans and further expose and confirm a myriad of crimes and unethical behavior by President Trump, his personal lawyer Rudy Giuliani, and members of his Cabinet.

Through his attorney, Bolton has alerted Adam Shiff he was part of many conversations, meetings with Trump’s sycophantic office, and administration officials that were not reported or uncovered by the free press. Bolton is claiming through his lawyer there is much more to say.

The administrations' timeline in the Ukraine scandal as revealed in Bloomberg News is bogus as reported by Bloomberg News. Bloomberg’s reporting cites five people familiar with the matter” in the bombshell new report “…

“President Donald Trump says he lifted his freeze on aid to Ukraine on September 11, but the State Department had quietly authorized releasing $141 million of the money several days earlier.

The State Department decision, which was not reported previously, stemmed from a legal finding made earlier in the year and conveyed in a classified memorandum to Secretary of State Michael Pompeo. State Department lawyers reported the White House Office of Management and Budget, and thus Mick Mulvaney and President Trump had no legal standing to block the defense aid to Ukraine.

This makes President Trump’s order to halt the military assistance to force Ukraine to announce investigations into Joe Biden, his son, and other Democrats in hopes of improving his re-election chances completely illegal from start to finish.

Requiring Ukraine’s President Volodymyr Zelenskiy to announce an “investigation” into the Biden’s and Hillary Clinton” to get the needed military aid has now been confirmed by multiple, State Department officials including Lt. Col Alexander Vindman, Director of European affairs on the National Security Council, not only was he aware of Trump’s extortion attempt but that he understood Pompeo, then-National Security Advisor John Bolton and Defense Secretary Mark Esper had all recommended releasing the funds in an August 15, 2019 meeting with the President himself.

Meanwhile, the Office of Management and Budget (OMB) has argued all along that the congressional notification by the State Department was only one step, and it still had the power to hold the money after it was approved for payment because of its authority to apportion -- or distribute -- the funds. OMB spokeswoman Rachel Semmel said Saturday in an email.

“At no point was this pause inappropriate, let alone illegal,”

The State Department, however, disagreed. Ambassador William Taylor, the envoy to Ukraine, said during his testimony that it was remarkable that the legal offices at the State and Defense departments had decided…

“They were going to move forward with this assistance anyway, OMB, notwithstanding.”

The impeachment testimony from William Taylor, the temporary envoy to Ukraine, told the congressional inquiry that during the summer, State Department lawyers had advised that the aid could be spent regardless of the hold by the White House budget office.

The hold on funds had set off a panic, at both the State and Defense Departments, because the law required them to spend the money by the end of the fiscal year on September 30 or lose it. In reality, they had to get the aid moving through the system two weeks earlier -- around September 15 -- because of a requirement for a two-week notification to Congress.

By late August, however, bipartisan demands were building in House and Senate for release of the military aid money -- and beginning to insist on an explanation of why it was being withheld. With the September deadline approaching according to President Trump, he was persuaded to release the money in a phone call that day with Republican Senator Rob Portman of Ohio.

“He called up, ‘Please let the money go. Trump said, ‘Rob, I hate being the country that’s always giving money.

Portman, according to Trump, said…

‘You know what? But it’s important …I gave the money because Rob Portman and others called me and asked. But I don’t like to be the sucker. European countries are helped far more than we are.”

Now we learn that John Bolton was the person who stepped in behind President Trump and his acting Chief of Staff to release the military aid. The OMB, through a spokeswoman, denies Bolton did not act behind Trump and Mulvaney’s back and never had the authority to do so. The facts, however, point in a different direction because witnesses that have testified indicated Bolton was waging a battle with senior-level OMB officials over the Ukrainian funding -- and opposed putting any conditions on the aid.

All of this may explain what Bolton’s lawyer is attempting to get across to Congress in his letter about the former national security adviser having “new details” about the Ukraine matter that they don’t know about, without elaborating.

Bolton has declined to testify against White House orders unless he is subpoenaed and the judge rules he should. Bolton’s testimony could be explosive because Bolton told the National Security Council’s senior director for Europe, Fiona Hill, that he didn’t want any part of “whatever drug deal” Mulvaney was “cooking up” with U.S. Ambassador to the European Union Gordon Sondland.