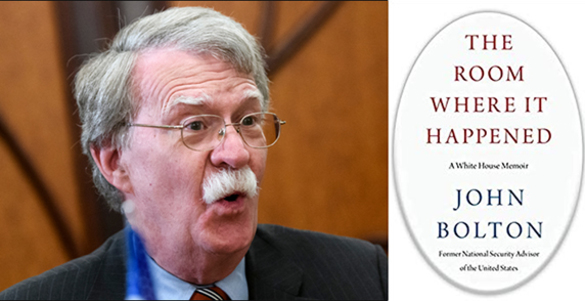 Trump is calling his former national security advisor a liar while trying to stop him from testifying under oath.

The last national poll showed that 7 out of 10 people want to hear from relevant witnesses and see all the relevant documents connected to the impeachment of President Donald John Trump.

On Saturday, we heard from the President’s legal team repeatedly argue that the there is no direct evidence, witness testimony that President Trump intentionally held up the $391 million in defense funds to extort or bribe the Ukrainian government into announcing and opening an investigation into the Bidens and other Democrats.

Now President Trump is being confronted by his former national security advisor’s Bolton’s new book “The Room Where It Happened.” The book affirms that Trump told Bolton that he was withholding the $391 million in defense funds for precisely the reason he has been impeached.

It’s being reported that several GOP senators are complaining Trump gave them no warning about the accusations even though he may have known about this book’s revelations. Trump is approaching 16,000 lies and misrepresentations according to the Washington Post’s tracking is saying John Bolton, the conservative icon and foreign affairs touchstone who left on bad terms, is lying in his book for the sole purpose of selling books.

Today’s GOP Senators have to be wondering what other bombshells will go off in the next few months both during the trial and after they acquit him as the 2020 election approaches. The GOP could lose over 11 Senate seats in a wave election like 1976, 1980 or 2008 in addition to control of the White House. The Senators deciding whether to resist calling John Bolton and other witnesses have to stop and wonder what happens if someone like California Senator and former presidential candidate Kamala Harris is appointed Attorney General should a Democrat defeat Donald Trump in November.

All of the evidence hidden from the public at that point would come pouring out along with a maze of prosecutions of President Trump, many of his family members, business associates, former and current cabinet members.

Then there are the likely ethics investigations and perhaps even criminal prosecutions of sitting members of the Senate and Congress that could make 2022 another follow-up wave election that cripples the Republican Party for a generation or longer.

There are bombshells ahead in June, regarding Trump’s tax return decisions as well as decisions on whether Don Meghan, the former White House Council is or isn’t immune from congressional testimony.