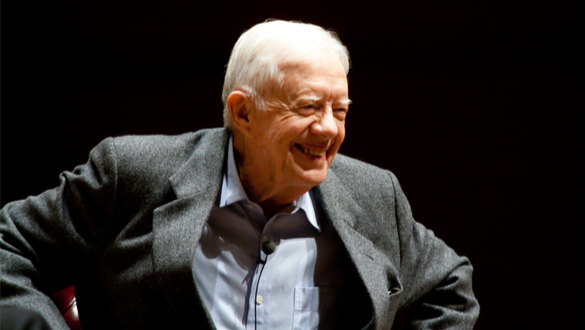 Former President Jimmy Carter, 94, went where no one has gone before, to Donald Trump’s deepest fear. During a human rights event at a Carter Center event in Leesburg, Va., he was asked how he would deal with Russian meddling in the last presidential election…

“The president himself should condemn it, admit that it happened, which I think 16 intelligence agencies have already agreed to say… And there’s no doubt that the Russians did interfere in the election, and I think the interference, although not yet quantified if fully investigated, would show that Trump didn’t win the election in 2016. He lost the election, and he was put into office because the Russians interfered on his behalf.”

Moderator world-renowned historian and author Jon Meacham then asked the former President if he thought Trump was an illegitimate president. Carter paused considering the pointed question as the audience broke out in laughter and then said…

“Based on what I just said, which I can’t retract, I would say yes.”

As for President Trump, he showed once again at the G-20 summit in Osaka, Japan that he considers the interference by Russia in 2016 a hoax and laughing matter. Trump openly joked with Russian President Vladimir Putin, wagging his finger and saying…

“Don’t meddle in the election, please,”

President Trump’s steadfast refusal to recognize the grand jury indictment of Russian intelligence officers, by the Special Council, who were part of the Russian military, launched a concerted attack on our political system.

The DOJ indictment alleges that the named Russians and unknown accomplices used sophisticated cyber techniques to hack into computers and networks used by the Clinton campaign.  They stole private information, and then released that information through fake online identities and the organization WikiLeaks.  The releases were designed and timed to interfere with our election and to damage Hillary Clinton’s presidential campaign and to aid the election of Donald Trump.

Also, the grand jury alleged in a separate indictment, a private Russian entity engaged in a social media operation where Russian citizens posed as Americans to interfere in the 2016 election for Donald Trump.

The indictments allege other activities by Russians to interfere in our political system.  They needed to be investigated and understood.  This is why President Carter believes if the Russian interference were thoroughly investigated and exposed,  American’s would come to his conclusion that Trump is an illegitimate President.

So far there has been no evidence that Russia interfered with vote tallies, they did reach out to Trump campaign over 100 times, hacked Democratic email accounts and flooded social media with fake postings.

U.S. intelligence organizations have stated for the record Russia interfered with the 2016 election including the CIA, FBI, Justice Department, Department of Homeland Security, Office of the Director of National Intelligence and both the House and Senate Intelligence Committees.

President Trump nevertheless repeatedly casts doubt on the conclusion that Russia perhaps because he believes if the American people believe Russia aided him in his election, they would conclude he is an illegitimate President.

Trump said following his July 2018 secret meeting with Russia’s Putin in Helsinki, in which he allowed no notes to be taken or the presence of any of his top advisors in...

“They said they think its Russia, I have President Putin; he just said it’s not Russia. I will say this: I don’t see any reason why it would be.”

When pressed on July 19th after a storm of criticism and open question as to whether Trump was a traitor, Trump attempted to clarify, saying…

“I accept our intelligence community’s conclusion that Russia’s meddling in the 2016 election took place. It could be other people also. There’s are many people out there.”

President Carter’s openly questioning Trump’s legitimacy will further enrage Trump. That much is for sure.

There is another thing for sure; it is not an illusion or Fake News when President Trump Tweets more favorable sentements towards the character of President Putin than members the U.S. Congress, fellow GOP presidential opponents, former aids, former attornies, NATO, Allied nations and their leaders, trading partner countries, the news media, etc. 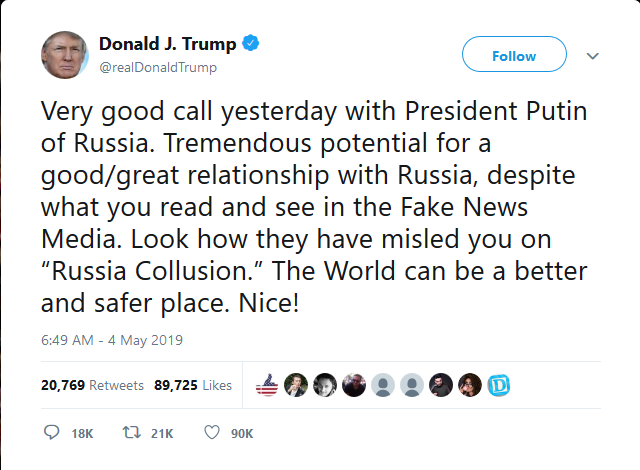