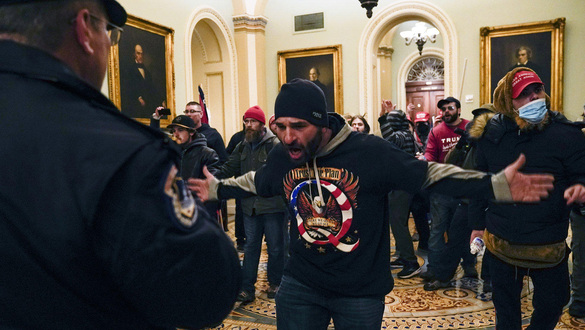 Senator Lindsey Graham Told Capitol Police to Use Their Guns on January 6 to take back the U.S. Senate. Since that day, he has become one of the most committed Republicans to kissing former President Trump's ass and encouraging his running for the Presidency in 2024.

Republican Sen. Lindsey Graham (R-SC) managed to muster enough courage on the evening of January 6, 2021, to speak out and notice everyone his devotion to disgraced twice impeached President Donald Trump was over.

Earlier in the day, he also had the guts to urge Capitol police to use their guns and regain control of the Capitol on January 6, according to a new report he said to the capitol police officials he spoke with…

"What are you doing? Take back the Senate! You've got guns. Use them."

According to an extensive report from Washington, Post Graham was "irate" that the country's Senators were forced to leave their chambers due to the storming of the Capitol. According to an unnamed Republican senator with knowledge of the incident, The Washington Post says that he also said…

Putting any doubt about Graham's willingness to allow the Capitol Police to shoot as many rioters as possible, his office confirmed the quotes as "accurate" to Fox News today.

"Graham was quite clear on this point, noting that the backpacks and other items brought into the Capitol could have contained bombs and explosives. The damage could have been much, much worse,"

Also, a new revelation was made public. According to the report, Graham called Ivanka Trump, former President Donald Trump's oldest daughter, multiple times on January 6, 2021, as the insurrection was underway and gave suggestions on what the then-president should say. Graham reportedly told her…

"You need to get these people out of here. This thing is going south. This is not good. You're going to have to tell these people to stand down. Stand down."

Graham slammed the storming of the Capitol, saying on January 7 that "warning shots" and "lethal force should have been used once they'd penetrated the seat of government."

"We've lost our will and our determination to stand up for law and order. When you let a courthouse be attacked, and nobody gets prosecuted, the next thing you know, it gets worse. To all the mayors out there who have discord and unlawful behavior in your city, get on top of it."

However, Trump has called out both Senator Graham, as well as Senator Mike Lee, just over a month ago as "unwilling to fight for the presidency of the United States," after reports that Graham was "unpersuaded" by Trump's claims of widespread fraud in the 2020 election. Graham, however, has continued supporting a potential 2024 presidential run by Trump.

Graham said at the Michigan Republican Party's leadership conference at the end of September.

"I don't think Trump is listening. He might be. I hope President Trump runs again."

All of this shows that the January 6, 2021 insurrection was every bit as violent as portrayed by the police officers, members of Congress, and their staff have described. This is in sharp contrast to the lack of support from Senator Graham and the majority of Republicans in both the House and Senate that have stonewalled investigating the January insurrection.

Lindsey Graham told police to 'use' their guns against January 6 rioters: 'Take back the Senate!'